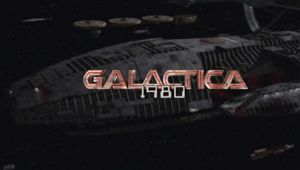 This fall, on the Sci-Fi Channel, the waiting is over as the rag-tag fleet finally finds Earth in the three hour premiere of "Galactica 1980".

Set 30 years after Sci-Fi's original Battlestar Galactica, Galactica 1980 is a reimaging of the original classic ABC series that ran for five months 26 years ago.

Gritter, darker, and contemporary, Galactica 1980 will reimagine the classic themes of the old show, with an aim towards exploring dramatic conflict and humanity's flaws.

Reimagineer Ronald D. Moore explains the approach this way: "The original Galactica 1980 concept was an interesting one: here we are, we've found Earth, but now what? And now we've brought the Cylons here, too. This was a very dark and interesting place to begin a show.” 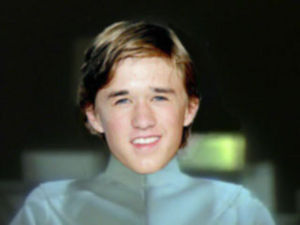 Although the production team had planned for all the roles to be portrayed by the original cast, for some reason only Edward James Olmos and Grace Park were available, and a mostly new cast has been hired. Some highlights: Haley Joel Osment has been cast as the the mysterious teenage genius Doctor Zee, and Christopher Walken as the traitorous Xavier.

Commander Adama, again portrayed by Olmos, has dyed his hair snow white for the role, and will sport a hideously fake beard, in homage to the original program. (Since the bearded Olmos looks a lot like Santa Claus, a holiday episode entitled "Rudolph's Shiny Galactica New Year" is also in the works.)

Exonerated from endangering the Fleet years before, Grace Park returns in the role of Boomer, who has advanced to the rank of Commander (but we won't see much of her until the reimagining of "Return of Starbuck").

Upon realizing Earth of 1980 has insufficient technology to face the Cylons, Adama sends his adopted grandson Troy (the grown up Boxey) to the Earth along with his pal Dillon. The homoerotic subtext of the original series will be front and center in this new series.

Ronald D. Moore has also promised to have the occasional homage to the original show. "In viewing the old shows, two things stood out. One, the puffy jackets for the two leads were amazingly effective. And second, I love that invisibility sound effect, that has so got to stay."

Contemporary themes familiar to the audience will also end up in the show. The reimagined episode "Spaceball" will feature a walk on by Barry Bonds, while "The Night the Cylons Landed" will explore drug use when Andromus and Centuri stumble into a Central Valley meth lab. 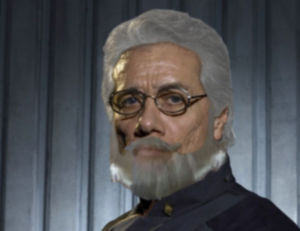 In another exciting episode, Commander Adama will head down to Miami, Florida where he will pose at the head of that city's vice squad. Saundra Santiago will make a surprise guest apperance.

Of course, with advent of CGI, many things are possible on the new show that weren't even conceivable previously. "Oh, there'll be flying motorcycles, alright," says producer David Eick, "But we won't stop there. You'll be seeing flying bicycles, flying skateboards, and even a flying Winnebago." The production also promises plenty of stock footage to round out the special effects buffet.

A major subplot for the series will feature Michael Ironside as the tough-as-nails leader of an military commando team tasked with tracking down the Galacticans, and preventing any threat the intergalactic farmers and kids pose to national security. Think X-Files meets 24 in an ass kicking one hour format.

Fan reaction to the announcement has been mixed. To quote one on-line source, "Holy sh**, you've gotta be kidding!"

Despite such responses, Glen A. Larson, creative consultant, has high hopes for the new spinoff. "I am sure I won't regret this series nearly as much as I did Galactica 1980. Also, on the subject of Galactica 1980. I'm sorry. I'm so very, very sorry." Larson is also working on a grittier, dramatic treatment of his other classic shows "BJ and the Bear" and "Manimal."

With the ending of season 3, RDM revealed that plans for Galactica 1980 are moving ahead.

RM: We're dusting off the flying motorcycles, man. We have some great ideas for those babies.[1]