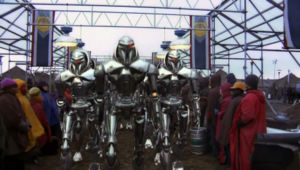 The Fall of New Caprica occurs on the 380th day after colonization of New Caprica, when a massive Cylon fleet, attracted by a nuclear detonation a year before, suddenly appears within the nebula that hid the barely-habitable planet from normal means of detection.

At the time of the attack, both the Galactica and Pegasus, both severely understaffed as a result of many crewman choosing to muster out in favor of settlement, have difficulty remaining combat-ready. Realizing that they are severely outgunned, Commander Lee Adama of Pegasus urges Admiral Adama to order the orbiting remainder of the Fleet to jump to escape coordinates.

Reluctantly, the Fleet retreats to an unknown location. As waves of Raiders and Heavy Raiders fly over New Caprica City, Caprica-Six, Sharon Valerii, and a Number Five copy enter President Baltar's office to indicate their intent to occupy the colony.

Faced with no choice, Baltar formally surrenders to the Cylons as waves of Centurions enter New Caprica City while a stunned population looks on. Kara Thrace and Galen Tyrol immediately vow to resist the Cylon occupation. (TRS: "Lay Down Your Burdens, Part II").