Cassiopeia is a former socialator who survives the destruction of the Twelve Colonies, and joins Galactica as a medtech assistant to Dr. Salik.

Before the Cylon Attack

Not much is known about Cassiopeia's history, except that when she was a child she sent out messages in an old Aerian merchant code for her father. Her father, presumably, was either a trader hailing from Gemoni or was an Aerian himself (TOS: "The Long Patrol"). Nothing is known about her mother. By some means she managed to become a socialator, a profession she found herself defending to other Colonials–including Starbuck (TOS: "Saga of a Star World").

As an adult, Cassiopeia met Commander Cain and the two clicked romantically after Cain apparently paid for her services. He went to her and maybe other socialators, for compassionate reasons - to mourn the death of his wife - which is something that Cain's young daughter, Sheba, objected to. After the Battle of Molecay, which saw the entire Fifth Fleet eradicated by Cylon forces, Cassiopeia believed (along with everyone else) that Cain and Sheba were dead. (TOS: "The Living Legend, Part I"). 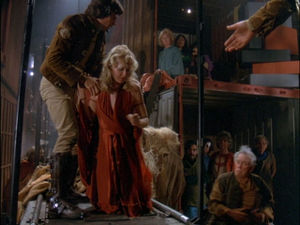 Cassiopeia manages to escape from the Colonies, earning a broken arm in the process, in the "borays of humanity" aboard the freighter Gemini. Apparently, several irate Gemons of the Otori Sect are ready to throw her (and what she represented) off the ship. Starbuck intervenes on her behalf, though, while he is surveying the ship for solium leaks with Boomer and Apollo.

She is interviewed by Starbuck, who finds out who and what she is. She finds herself automatically defending her profession to him too, though he is not concerned about it. She becomes attracted to him, although he probably has his reasons for going after her.

After Doctor Paye fixes her arm, Starbuck and Cassiopeia get better acquainted in a launch tube aboard Galactica. However, they are spotted by a jealous Athena, who steam purges the launch tube, causing some discomfort for both Cassiopeia and Starbuck.

Cassiopeia later purchases a Royal Suite on Carillon after Starbuck and Boomer discover the Ovions' mining/luxury operation. She hopes to foster intimate relations with the Warrior, but instead is taken down to the lower levels of the facility to become an Ovion entrée. Starbuck and Apollo rescue her from being part of an Ovion buffet (TOS: "Saga of a Star World").

After she survives the incident on Carillon she trains as a medical technician and becomes employed under the guidance of Doctor Salik. She matures and takes on a motherly role, escorting Boxey out of the pilot's bunks after they show him how to play Pyramid (TOS: "The Lost Warrior").

Her maternal nature, however, does not solely define Cassiopeia. She has fun with Starbuck on Rising Star in celebration of exiting their home galaxy of Cyrannus. She later finds out, however, that Starbuck was playing musical women between her and Athena, when they bump into each other while examining the insignia he gave each of them "to remember him by". She is instrumental in discovering that the transmissions beamed from Starbuck's stolen Recon Viper were of Aerian Merchant Code, thus allowing Apollo and Boomer to retake the stolen Viper as well as figure out what exactly was transpiring (TOS: "The Long Patrol").

When Cassiopeia learns that Cain is alive, she finds herself stuck between a rock and a hard place, undecided about her relationship with either man. She accompanies Cain to the Officer's Club aboard Galactica, much to the indignation of Sheba (TOS: "The Living Legend, Part I"). Later, she notices that the drop team to Gamoray has no medtech, as per guidelines, forcing them to accept her as part of the ground force - where she attempts to make amends with Sheba. Despite her motives, she does assert herself professionally and has Bojay treated on the battlestar Pegasus. She is also given the care of Sheba, who is injured during the daggitfight with the Cylons. When she is sent back to Galactica, Cassiopeia knows Cain well enough to know that he isn't planning on coming back (TOS: "The Living Legend, Part II").

Cassiopeia assists Dr. Salik in saving Adama's life during emergency surgery to remove a shard embedded in the wall of his heart. A massive fire aboard Galactica, causing generator disruptions, makes the operation extremely risky, but it is nevertheless successful (TOS: "Fire in Space").

Cassiopeia is one of the many Colonials who succumbs to the charms of Count Iblis, as she enjoys the party atmosphere throughout the fleet caused by the Prince of Darkness (TOS: "War of the Gods, Part II").

Her strong, steady relationship with Starbuck prompts the Warrior to comment that Cassiopeia is the only person he ever would consider becoming Sealed to. Cassiopeia performs the genetic testing on Chameleon, to determine if he is Starbuck's father. She informs Chameleon about the positive results of the test, but he convinces her not to reveal the results to Starbuck in order to prevent the Warrior from foregoing his duties to spend time with his newly-found father. Chameleon convinces her to go along with the lie by promising to eventually reveal his identity to Starbuck once he and Cassiopeia get Sealed (TOS: "The Man with Nine Lives").

Cassiopeia is a frequent spectator to the Triad games. More than anyone else, she recognizes the angry look on Starbuck's face when he is ejected from the game because of Ortega. She later breaks up a fight between the two competitors and informs Starbuck brusquely that she would be returning to Galactica - with or without him. When Ortega is found shot to death by Starbuck's laser, she attempts to persuade Starbuck to accept a self-defense plea proposed by Chief Opposer Solon. When he refuses, she is maneuvered into testifying against him about his rage toward Ortega, although the real killer Karibdis is eventually discovered (TOS: "Murder on the Rising Star"). 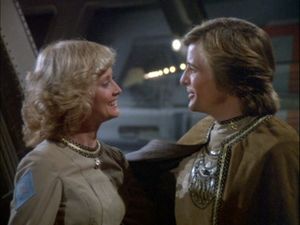 Cassiopeia had a feeling Starbuck would come back to her (TOS: "Take the Celestra").

In her role as a medtech she becomes involved in the mission to return Michael and his fellow travelers to Paradeen. Able to breathe the thin air on Michael's ship, she monitors the medical equipment keeping them in suspended animation. Cassiopeia also assists in the search for Starbuck after he gets lost in the convoluted passages under Paradeen's main city (TOS: "Greetings from Earth").

Cassiopeia's relationship with Starbuck grows strained when he is reunited with previous love interest Aurora on the Celestra. Attempting to make some semblance of peace between the two, Cassiopeia takes back the duckets to the Spheroid Concert since she doesn't plan on going alone. However, when Starbuck returns after Celestra's mutiny has been resolved, she reveals that she had a feeling he would be back (TOS: "Take the Celestra").

While Cassiopeia and Starbuck, accompanied by Apollo and Sheba, are in the Celestial chamber "enjoying the view", they pick up a mysterious signal, which Apollo believes may have originated from Earth. However, nothing comes of that signal, since its recording is destroyed in the subsequent battle. Despite getting off to a shaky start because of Cain, Cassiopeia and Sheba were able to reconcile their differences and become friends; while discussing her feelings for Starbuck, Cassiopeia is surprised to hear Sheba proclaim her feelings for Apollo (TOS: "The Hand of God").

Cassiopeia's home world is given as Scorpio, not Gemoni. As for her change in profession, it is mentioned that since her arrival aboard Galactica, she "trained as a medical corpsman and now pursues that profession exclusively". She was 51 at the time of the fall of the Colonies.[1]