Valley of Darkness - When he wakes up, he is in Number Six's arms, surrounded by human skulls and bones. Six tells Baltar that they were victims of human sacrifice, and that the Scriptures were lies, fabricated to cover up how barbaric life on Kobol really was. 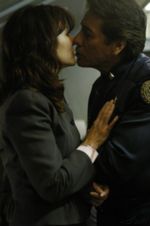 September 2006 - Flight of the Phoenix-Laura.jpg

Flight of the Phoenix - The "Phoenix" is dubbed Laura in honor of President Roslin.

Valley of Darkness - A Cylon Centurion catches blood on its chest plate as it fires its guns aboard Galactica.

Exodus, Part II - Pegasus goes out in a blaze of glory, destroying two Cylon baseships in its final stand.