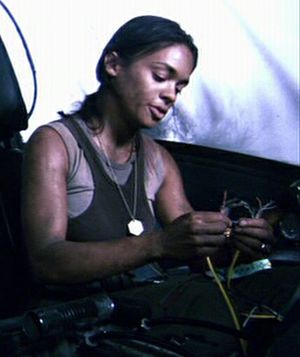 Datacord is used in Raptors as part of its avionics, particularly its fly-by-wire flight controls.[2]

After Starbuck's Raptor crashes from Cylon fire during a reconnaissance run on the algae planet, Lieutenant Anastasia Dualla manages to use datacord from the ship's communication system to repair the flight control console (TRS: "Rapture").

Sharon Agathon directs Kara Thrace to remove some "slow mode, 1310" datacord from their Raptor as part of a repair to mate their Colonial jump systems to the stricken baseship to restore its FTL ability[3] (TRS: "Faith").