While they are stranded on the devastated colony world of Caprica after the Cylon attack, Karl Agathon and Sharon Valerii run through two unnamed cities in their quest to get to an airbase near Delphi and commandeer a craft there to escape the occupied planet and find the Fleet. Their explorations of the two cities brings them to many deserted neighborhoods and locales, all the while being hunted by Cylons.

Outside Caprica City is a region where two cities spared by the Cylons are found. When Helo and Valerii locate this first city in the episode "Bastille Day", several differences distinguished this city from others on the planet. Unlike Caprica City, this one does not have the futuristic metallic skyscrapers and glittering office towers (although a few such buildings can be seen behind a tall green office building in the background). The city is remarkably well preserved, considering the nuclear bombardment of the planet. Not even a single window is cracked from shockwaves. 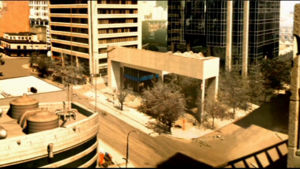 Helo and Valerii search the city for a possible survivor, given away by a broadcast distress signal they received earlier. They wander into a terraced plaza in front of a large cylindrical public structure. As they meander between the cast-iron lamp posts, Helo calls out "Hello!" in a loud voice, commenting that he hates cities because "no one ever stops to help you."

After leaving the plaza, the two walk down a paved path leading between two office complexes. Here, Valerii asks where the citizens were when the bombs fell. Helo responds, "In their beds, at their desks, anywhere." This comment is followed by Valerii seeing a rat-gnawed corpse propped up against the glass entryway to one of the towers. All the while, the two are being watched by copies of Number Six and Number Five, who are perched on the rooftop of a civilian transfer bridge connecting the two office towers. 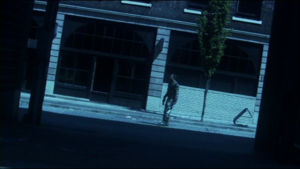 Helo on a street outside the restaurant (TRS: "You Can't Go Home Again"). [2]

The distress signal leads Helo and Valerii to a restaurant on a side street. Here, they find a fully stocked fallout shelter, but no survivors. The signal comes from a military-band broadcast signal sent out by a radio. Valerii and Helo set up camp here, but the Cylons soon raid the establishment while Helo prepares breakfast. Valerii is "kidnapped" and the shelter ravaged. 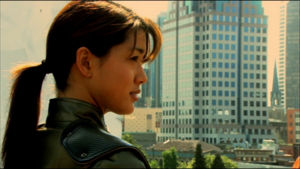 Caprica-Valerii on a rooftop overlooking the city (TRS: "Litmus").

In the episode "Litmus," Helo squats on the garbage-strewn rooftop of a low-rise building in what appears to be the central city (evidenced by large numbers of skyscrapers and office towers). Across the street on a higher structure with an antenna, copies of Six, Five and the "kidnapped" Valerii watch Helo in secret. Surrounding both groups are lower, older stone buildings, more modern apartment blocks and large cubical or geometrical commercial buildings.

This abandoned building is located on the ground floor of the building occupied by Six, Five and Valerii. The interior is dingy and bereft of any kind of cargo, with only greasy steel beams and missing floor panels to provide variety. Helo enters this bat- and Cylon-infested building to rescue Valerii. Outside the warehouse are two alleys, one a paved garbage-strewn wreck with several power transformers and telephone lines. The other is a dirt alley that leads between a building and fenced lot towards a skyscraper topped with a flag pole.

Not much of this city is seen in "Tigh Me Up, Tigh Me Down", except for a few peeks through manhole covers, as well a street at the end.

Helo and the "rescued" Valerii spend their time in this city dashing through the leaky sewer tunnels and catacombs, desperately trying to escape a Cylon detachment searching for them. Occasionally, the two peek through manhole covers in an attempt to assess the situation on the surface. Each time, they see Cylon Centurions marching through the tree-lined plazas and streets and Heavy Raiders flying low, skimming the tops of cubical buildings. The sewers Helo and Valerii use as a means of escape are dimly lit, almost completely dark, with arched passageways and sole- to knee-deep water on the floors.

At the very end of "Tigh Me Up, Tigh Me Down", a Six and a Five are in appears to be the city's riverfront downtown. They walk out of the forest of modern glass and cinder block towers and onto a bridge, talking about how their troops searched every room of every building despite Helo and Valerii managing to escape. The bridge is actually a three-lane highway. The left and right lanes remain level, but the middle lane sinks towards a subterranean intersection with a tunnel, where several Centurions await the arrival of the two humanoid Cylons.

The street lights in this scene provide an indication of the city's history. In the midst of the buildings, the bulbs hang down from elaborate style cast-iron poles. On the bridge, tall cast-iron lamp posts rise up from the stone-carved balustrade. 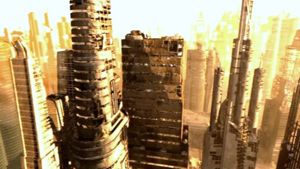 When Kara Thrace flies to Caprica in her captured Cylon Raider, she overflies a partially destroyed city (TRS: "Kobol's Last Gleaming, Part II"). The buildings are not entirely destroyed, but appear to have been hit by a powerful shockwave, with the glass facades having been blown out.

This is not Delphi, since the city is intact when Agathon overlooks the area in "Colonial Day" and also doesn't posses such a skyline. Furthermore the Cylons make extensive use of Delphi (TRS: "Downloaded"). It is also unlikely to be Caprica City, as a 50 megaton explosion - as stated in the Miniseries - would have leveled the entire area [5].