On the March 19, 2008 broadcast of the late-night CBS talk show, Late Night with David Letterman, most of the central cast of the Re-imagined Series presented The Top Ten Reasons to Watch the New Season of Battlestar Galactica. The cast was assembled as a humorous promotion of Season 4, the final season of the Re-imagined Series, and appeared in costume and generally in character (although Jamie Bamber delivered his joke with his natural accent). The actors were introduced by their character names, not their real names.

Letterman's humorous Top Ten lists are renowned to poke fun at news, politics, entertainment or other stories in the United States and elsewhere, and while usually read by Letterman himself, are occasionally delivered by surprise celebrity guests.

Each item on the list was read by one cast member as follows.

10. Chief Galen Tyrol (Aaron Douglas): "In the dramatic season opening episode, we saved 15% by switching our insurance to GEICO."

9. D'Anna Biers (Lucy Lawless): "You'll find out what's in the hatch and who gets off the island...crap, wrong show!"

7. Sharon Agathon (Grace Park): "What else are you going to do? Read a book?" 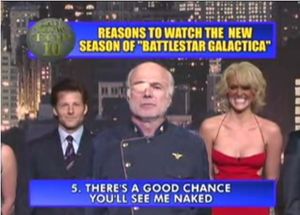 2. Laura Roslin (Mary McDonnell): "I take on the most challenging task in my political career--doing a lame top ten list on a third-rate talk show."

And the number one reason:

1. William Adama (Edward James Olmos): "Watch me lead us into a war against the Cylons without an exit strategy."

The video is available at the official Late Night with David Letterman web site.