Image 4 and 6 seem to be missing. —The preceding unsigned comment was added by Furyofaseraph (talk • contribs).

Could somebody post a cap of Doc Cottle's cubit (from Black Market)? I'm doing the episode summary for Man with Nine Lives (TOS) and it appears that the old coins have a similar look (gold rectangles). --Steelviper 19:32, 9 February 2006 (EST) 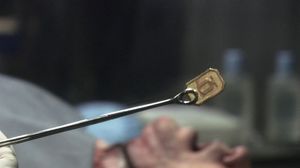 Thanks, Kahran! Looks similar, but the new ones have the "cut corners". I'm not sure if there are any better shots of TOS cubits. The only other instance I can recall are from The Long Patrol (also aboard the Rising Star), but I think they're likely further out shots than this. If we end up making a comparison I may go hunt it down. --Steelviper 20:18, 9 February 2006 (EST) 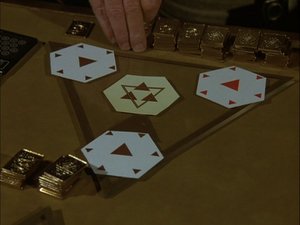 Just curious if anyone share my suspicion that the Colonial equivalent of cents is "pieces"? I ask because of the pre-Fall financial programme Cubits and Pieces. You like, Dollars & Sense. --Mars 22:40, 12 February 2010 (UTC)