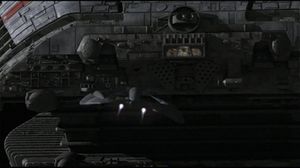 A Cylon Raider zeros in on the observation deck.

The observation deck is a recreational room located on the bow of Galactica, which is one of the few locations in the vessel which has windows to view the surrounding space outside the ship. When the room is not in use, large doors protect the bay window from being shattered by battle damage, and space debris. 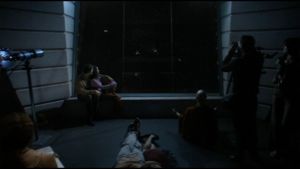 Vipers maneuver in front of the bay window.

Following the Fall of the Twelve Colonies, the room is largely used by couples for courting purposes. Because of the high demand for this room, officials on Galactica have had to impose time limits on each group that enters.

Occasionally, Viper pilots on CAP duty like to dazzle spectators, and perform maneuvers in front of the large bay window.

The observation deck was ultimately destroyed during the Battle of the Colony, after Galactica was used to ram the Colony, resulting in the collapse of many of the forward compartments in the bow section (TRS: "Tigh Me Up, Tigh Me Down", "Daybreak, Part II").

In the "Tigh Me Up, Tigh Me Down" podcast, executive producer Ron Moore explains how the observation deck highlights one of the naturalistic science fiction style of the Re-imagined Series:

"There really aren't any windows aboard Galactica, it's not really a traditional sort of sci-fi spaceship where you get to look outside and see space all the time. It's not like the bridge of the Enterprise where there's a giant viewscreen where you're always looking at stars and looking at space. And aboard Galactica, which is really a warship, the idea that there would be big places of windows was sort of ridiculous. But it did feel right that perhaps there was one place, that perhaps there was one area of the ship which accepted a window, a port, to look out, and that it would be a fairly confined space for the crew on these very deep space missions that probably last months, if not years, and that there might be a place where they could go and just stargaze for a little bit. And in this situation, it seemed like there would be a lot of people lining up to try to look at the stars and— y'know, a break from the monotony of staring at metal walls and the claustrophobia of being onboard a spaceship out in the vacuum of space."