Overall Review of the Marvel Series

The Marvel Galactica series had great potential because comics were better equipped for science fiction stories than television was back in 1978 (unlike today when relatively inexpensive CGI special effects allow television to do sci-fi/fantasy series such as Bablyon 5, Xena, and Hercules that wouldn't have been possible even 10 years earlier). The range of stories in Galactica television series were limited because there was not enough time on a weekly TV schedule to shoot special effects scenes. In comics, artists can easily create entire universes and blow them up at will. This advantage should have led to better stories than what we saw on the television episodes, but overall the TV series was still much better what Marvel gave us. The main problem was the writing. It was consistently average, and too often mediocre. Only 5 issues - #11, 12, 13, 16, and 19 - are above-average. 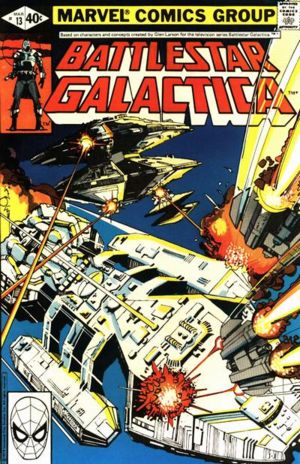 The best issue of the Marvel series!

The adaptations of Saga Of A Star World and Lost Planet Of The Gods are okay, but nothing special. 3 issues simply wasn't enough to do justice to the pilot episode, and neither were 2 issues enough for Lost Planet (Note: The only noticeable difference between the comic and the televison series is that Serina dies on the planet Kobol, but this was probably done to shorten the story more than anything else.) Issue #6 has Adama submit himself to a device called The Memory Machine in an attempt to remember the coordinates of the planet Earth that he had briefly seen on the planet Kobol before Cylon fire destroyed the writings. In #7, a revolt causes the machine's controls to be damaged, thus trapping Adama inside the machine (Removing him after that would have destroyed his sanity). Adama is trapped inside the machine until #12, and there is a great deal of monotony inbetween. #8 and #10 are devoted entirely to stories from Adama's past (which Adama is reliving due to the Memory Machine). #8 is a forgettable story of Adama and Tigh as young warriors. #10 is better, as it involves a major battle with Cylons that involves Starbuck and Apollo. #9 - "Space Mimic", however, is hands down the worst issue of the entire series (an alien shape-shifter boards Galactica and assumes the identity of Adama).

The Marvel series hits a crescendo with #11, 12, and 13. The Colonial fleet discovers a gigantic alien ship (if you could call it that) called Scavenge World. It inhabitants are various kinds of aliens who capture starcraft and dismantle them for their own private use. Starbuck is captured and receives, without trying, the romantic interest of Eurayle, the beautiful human female empress of Scavenge World. He tells her of the pursuing Cylons and gets her to agree to spare the Colonial fleet in exchange for helping Scavenge World lead the Cylons into a trap. Eurayle has mind control powers which she says can free Adama of the Memory Machine, but only if Starbuck agrees to remain behind with her. Starbuck accepts her offer, and she manages to free Adama just as the Cylons attack. The space battle is particularly gripping as Lucifer (now the Cylon leader; he makes a comment that implies Baltar is dead) has a Cylon basestar attempt to ram Galactica head on. This is an exceptional story that never could have been done on the television series due to its limited special effects.

The series falls apart after this story. The Cylons don't appear again, except for a single advanced Cylon in #16 and an illusional battle with Cylon raiders in #21 (Don't ask). What's frustrating is that Marvel does things that the television series should have done -- the compelling Sire Uri sticks around and is the perfect foil for Adama -- Boomer, Athena, and Jolly are each featured in their own individual stories -- yet it fails to do them in a compelling fashion. Of the remaining stories, only #16 and #19 are particularly memorable. In #16, Apollo comes across an advanced Cylon (The Mark III) in an advanced Cylon raider. This is turns out to be a legitimately gripping story. 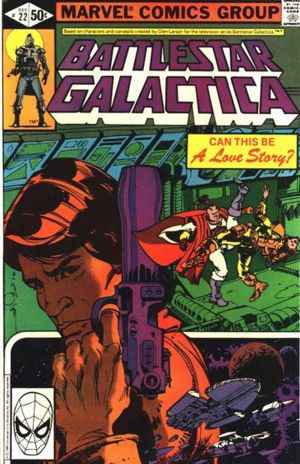 Issue #19 deals with Starbuck's escape from Scavenge World. It is very funny as Starbuck embellishes everything to make it look like he had a friendly parting with Eurayle. As he tells his version, the reader is allowed to see the actual events that occurred: Eurayle learns of Starbuck romancing other women, and she tries to kill him; he barely escapes with his life. #20 has Eurayle and other Scavenge World ships pursuing the fleet, but it never gets interesting. The last two issues, #22 and #23, comprise a two-part story that centers around Jolly trying to uncover civilian piracy within the Colonial fleet. Jolly gets a love interest, but the story doesn't even tread water. In #23 Galactica finally uncovers the coordinates to Earth. The series ends with the Colonial fleet using new technology to hyperwarp to Earth.

This is a let-down ending. Talk about ending with a whimper instead of a bang. Couldn't there at least have been a final battle with the Cylons? We know the Colonials will reach Earth, but we aren't even allowed to see what Earth is like. Oh well, at least the Marvel series ended with some sort of closure, unlike the TV series.

The only real positive thing that can be said about the last 8 or so issues of the Marvel series is that there is a noticeable improvement in the artwork, particularly the illustrations of Galactica. Still, it's not enough to save the stories. The cancellation of the TV series certainly had something to do with the decline in the comic's readership, but the biggest factor had to have been the poor writing. The Marvel series had the potential to produce better stories than the TV series did, but sadly it failed.

In closing, the Marvel Comics Battlestar Galactica series is poor overall. Like Galactica 1980, it is best left forgotten. It is recommended only for the most fanatical of Galactica fans.