Frank Frazetta (February 9, 1928 – May 10, 2010) was a world-renowned genre artist whose artworks ranged from comic books to movie posters to standalone art.

Frazetta was commissioned to produce art for the Original Series, particularly for "Saga of a Star World," "Lost Planet of the Gods," and "War of the Gods." Some of his art was used in promoting the series, and would later be used as covers for various Original Series tie-in novels, including The Cylon Death Machine, and later Richard Hatch's Redemption.

According to Syliva Chao, the then-wife of art director Henry Lehn overseeing Frazetta's work for Galactica, ABC only received copies of the print as Frazetta was disinterested in doing any work where he was unable to retain his original pieces. Furthering such conflict between ABC and Frazetta, the buttocks and the perceived sexualization of the women in his artworks caused considerable friction. According to Chao, Frazetta's thoughts on ABC's changes were "fuck them, I’ll just keep the paintings and fuck your picture," although Lehn was able to convince ABC to make use of Frazetta's artworks as they mostly stood.[1] 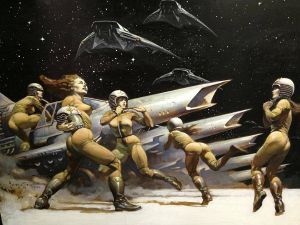 Scramble, one of Frazetta's most notable artworks, inspired by "Lost Planet of the Gods."

Scramble is the title of the artwork depicting many female pilots scrambling to their Vipers, ostensibly for promoting the "Lost Planet of the Gods" two-parter.

For the female forms depicted, notably the "booty" of the female warriors, Frazetta drew inspiration from Syliva Chao, the then-wife of Henry Lehn, TV Guide's art director. Of further note, the original artwork (oil on canvas) was retained by Frazetta, and ABC was only furnished prints for their use.[1]

According to Chao, the artwork was modified by ABC to soften the nipples upon the womens' breasts when they utilized the promotional artwork. She noted that she felt that they were "such prudes" for doing so.[1]