Garrett performed stunts in a variety of other genre productions from the 1960s through the 1990s, including Lost in Space (for June Lockhart[2], the mother of Anne Lockhart; Sheba from Battlestar Galactica), Star Trek: The Original Series, Star Trek: The Next Generation, TRON, and Ghostbusters II.

While studying for her major in physical education at L.A. Valley Junior College, Donna Funk met her future husband, Ralph Garrett at a rehearsal of "Homer Garrett's Why-Knot Twirlers" (Homer Garrett was Ralph's father). Ralph had been on leave from the U.S. Army at the time, and was coincidentally in attendance to the rehearsal: "I picked Donna out of a crowd of 40 and walked right up to her to dance." The future Mrs. Garrett also recalls that "The moment he walked in, I couldn't take my eyes off him. I thought I couldn't possibly catch a man like that."[3]

Their careers in Hollywood afforded them a five-bedroom house worth $75,000 USD, a motor-home, a camper, a speedboat and four motorcycles, per a December 1974 People magazine article. They reportedly invested in apartment buildings.[3] 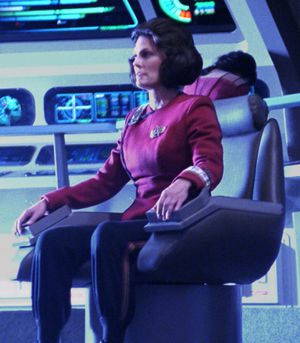 Garrett performing the stunt leading to the death of the "Yesterday's Enterprise" character with a similar name (Rachel Garrett).

Following the Garretts' marriage ceremony, Ralph Garrett received a job offer to work on Raquel Welch's A Swingin' Summer — at 6 A.M. on the first day of their honeymoon. While initially shocked at this, Donna Garrett was recruited the following day as a background performer. This kickstarted her career as a stunt performer, where her husband taught her about stunt work, while using her own training as a gymnast and diver.[3]

She quickly surpassed her husband as a performer; in 1974, she averaged six months worth of work a year, while her husband averaged only half that.[3]

Her career lead to parts into films of note, particularly Earthquake (1974) along side 141 stunt performers[7], The Poseidon Adventure (1972) alongside 41 stunt performers[8], Logan's Run (1976) as well as a variety of films doubling for Raquel Welch[2].

In Galactica 1980, Garrett worked as the stunt double for Robyn Douglass, and Douglass' contracts later stipulated that Garrett perform any stunts in her productions[1], including the TV movie "Her Life as a Man."

She is also known for her stunt work portraying "Bambi" in the 1971 James Bond film Diamonds are Forever, a role portrayed by Lola Larson. While both performers were uncredited in the film, Garrett is believed to be responsible for the stunts where Bambi fights Sean Connery's Bond.[2]

Garrett's career concluded in 1995, having worked in two different Star Trek's as a stunt performer that nearly bookend her credits of over 30 years: the Original Series' "The Cloud Minders" and The Next Generation's "Yesterday's Enterprise." For "Yesterday's Enterprise," she performed the stunts for the character of "Rachel Garrett," and can be seen when the bridge explodes leading to that character's death.