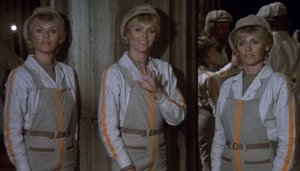 Theta is short-hand for Theta-class lifeforms, essentially human clones (TOS: "The Gun on Ice Planet Zero, Part I") created by noted Colonial scientist Dr. Ravashol, who was kidnapped by the Cylons and forced to work for them.

Ravashol is allowed to create the clones to aid in his work and are used as slave labor. The Cylons mandate that Thetas were to be sterile to maintain purity of the life-form, but this sterility would later correct itself, forcing the Thetas to hide their children in caverns of their underground city.

Each clone is given a specific task as Planner or Worker; Planners do the mental labor, while Workers do the physical labor. In addition, a female Theta series (of which Tenna is a part) exists, though their function is unspecified.

Cylons treated these clones with apparently greater distaste than the human Colonials, considering them to be sub-human and inflicted various mistreatments to Thetas. It is due to this, and the fact that they were able to procreate, that incites the Thetas to rise up in opposition to the Cylons. Despite initial reservations, they aid Captain Apollo's expedition in destroying the Ravashol pulsar and the Cylon garrison on the planet (TOS: "The Gun on Ice Planet Zero, Part II").