The title of this page given above is incorrect, due to technical limitations. The correct title is R&D TV. 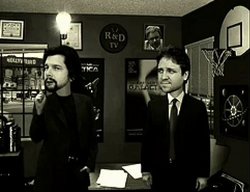 R&D TV is the name of a production company who produce the re-imagined Battlestar Galactica series. It was set up by writer/developer Ronald D. Moore and producer David Eick.

At the end of the credits of every episode of the series, Moore and Eick present themselves in cartoon form inside their office settling developmental arguments by maiming each other alternately in humorously creative and highly violent ways. This animation, produced by Jerry Hultsch[1] is immediately followed by the NBC Universal logo (and sometimes the "In association with Sky") every time.

The background pictures and other items in the office also change periodically, often hiding homages to film writers and directors.

The victim of each attack usually starts to suggest an idea ("Get this..!", "I think..", "I've got it..", etc.) as a lightbulb appears over the head of the episode's victim. This sign indicates that bloodshed, maiming, and/or death is about to begin. Luckily for the viewers, Ron and David are revived to write and produce again (before their next scheduled episode and subsequent R&D TV demise, at least).

Ron and David do not provide their own voices for the cartoon, but the creator of the skits impersonates their voices so well that Ron Moore has pointed out that most viewers don't notice.

Wired interviewed skit creator Hultsch about the skits in this interview for their online magazine.