I agree with you Merovingian, I think we should put the ships of the cylons (Basestar, raider, heavy raider, ressurection ship, etc.) There are 2 options, either put the cylon ships in the cylon portal, or put it in the ship portal:

1. (Ship Portal) If we were to put it in the ship portal, then we would have to edit the the portal to include two sections in it like: Colonial and Cylon, and then have all of the colonial ships, and then all of the cylon ships.
2. (Cylon Portal) With this idea of putting it on the cylon portal, maybe you could in the cylon portal have Cylon Models "Cylon Models of the Original Series" (model 0005) and have "Cylon Models of the Re-imaged Series" as sub heading/level 2 headings (also add the CGI Model); and then have Cylon Ships ; "Cylon Ships of the Original Series" (model 0005) and have "Cylon Ships of the Re-imaged Series" which would include (Basestar, raider, heavy raider, ressurection ship, etc.).

But with this idea with putting it in the cylon portal, would be too much as you have already said. so i agree with putting it in the ships portal. I also think we should also have the viper mark 1, mark vii, and the raptor in the ships part currently now, as those ships are the integral part of the whole of the show.--Lgamser 22:13, 4 June 2006 (CDT) 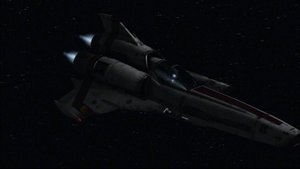 I think we should get another picture of the clyon raider, as it is too white in color, can somebody try and get the raider in space for the black background which fits in with the black theme of the website, and maybe another picture of the original series prision barge (i know it is hard to get), as it has the line on the right side that you can see on it.--Lgamser 06:26, 9 June 2006 (CDT)