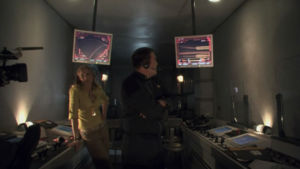 The Landing Signal Officer (LSO) is the officer who is responsible for all flight operations on the flight decks of battlestars and other military vessels. This includes the landing of all vessels, from Vipers and Raptors, to small liners such as Colonial One and Gemenon Traveler, as well as the operation of the launch tubes (TRS: "Miniseries", "Final Cut", "Flight of the Phoenix").