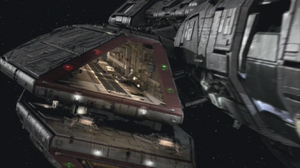 The flight pods are the most prominent feature of Colonial battlestars. They house the main landing bays, hangar bays, and launch tubes used to launch, recover, and maintain Vipers, Raptors, and atmospheric shuttles.

The design of ship's pods varies by class, but the overall structures are the same. They feature an upper level landing strip, a bottom level hangar, and launch tubes enclosed in a pod-like structure. 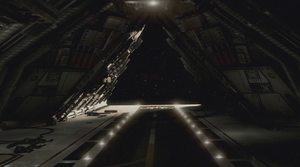 The landing deck is the main recovery spot for all inbound vehicles, including Vipers, Raptors, shuttles, and depending on pod size, civilian transports as large as Eversun starliners. The landing bay is also the main launching location of auxiliary craft that are too large or bulky to launch from the tubes below. Landing decks have all the commodities needed to maintain aircraft operations, such as fuel lines, electrical umbilicals, pressurized airlocks, and maintenance vehicles. The landing decks are overseen by the ship's designated landing signal officer. 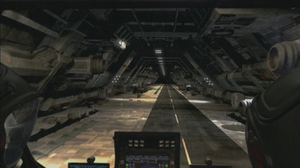 A Raptor flies above landing bay 3 on Pegasus

Generally, the landing bays are never pressurized, and do not feature artificial gravity. Instead, they rely on magnetism to bound vessels and people to the deck. This has allowed newer ships, such as the Mercury class, to include multiple landing bays that are "upside down," compared to the rest of the ship (TRS: "Pegasus", "The Captain's Hand", "Razor"). Because the magnetism does not grab hold of landing ships as quickly as artificial gravity, landing Vipers (especially during combat landings) will bounce before finally setting down and coming to a stop. This puts dents into the deck, which need to be repaired periodically (TRS: "33").

On smaller support ships, such as the Valkyrie-type and Berzerk-type cruisers, the landing bays are equipped the same, but cannot support larger transports. 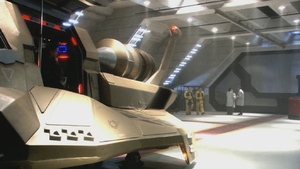 The hangar deck on Pegasus

Situated directly below the landing bay and connected via a series of specialized air tight elevators, the hangar deck is the main staging area where vessels are stored, maintained, and readied for launch.

Vipers and Raptors are kept along the back wall in a series of alcoves where they are connected to electrical umbilicals, diagnostic computers, and fuel lines. Mechanics and deckhands are able to repair and refit each plane before their next operation. Behind these alcoves is a second level gangway, accessed by a steep set of stairs, where officers and crew can watch over the deck, or access the rest of the ship.

Across from the repair alcoves are the entrances to the Viper launch tubes. Vipers are moved into position by modified reach forks, and then pushed into the tubes by deckhands, where it is then prepped for launch by the launch supervisor (TRS: "Final Cut"). Generally, larger battlestars carry up to eighty launch tubes, while smaller vessels, such as the Valkyrie-type, typically carry six. Depending on crew size and available resources, not all tubes will be utilized at the same time. 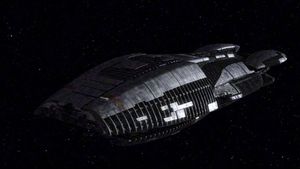 Flight pod operations vary depending on the class of vessel. On some battlestars, such as the older Galactica-type, flight pods needed to be retracted into the main body of the ship before performing FTL jumps, or to move equipment from pod to pod. However, other period ships, such as the Valkyrie-type battlestars, and Defender-type cruisers, or even the newer Mercury class battlestars, can not perform this operation, as their pods are permanently fixed (TRS: "Miniseries", "Pegasus", "Razor", "Someone To Watch Over Me", "Daybreak, Part II").