Chatting with Holly Legrand on the Set of 'One' 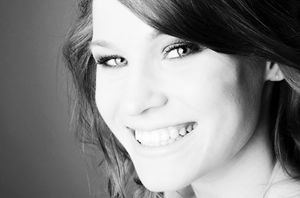 Holly Legrand, the star of One.

Chatting with Holly Legrand on the Set of 'One' is a The Caprican Entertainment article written by Ann Royall. It was printed in November 3, YR42.

It's breathtaking up here in the Gramadas, the vast Gemenon mountain range you can actually see from space. I'm on a particularly narrow road winding up the side of a particularly narrow slope, keeping one eye on the amazing view and another on the safety team who have done their best to rope off the edges and now stand guard to make sure no one takes a step in the wrong direction (that direction being "down").

No, I'm not on a hike, nor have I been kidnapped. I'm on location with One, the new action film starring Holly Legrand, one of Gemenon's rising stars.

One follows the adventures of a Gemenese teenager (Legrand) who's arrested for breaking and entering and spends a harrowing year in a youth rehabilitation program. She emerges a hardened warrior, and her skills attract the attention of the STO. She ends up becoming one of the organization's top operatives and is charged with instigating the most elaborate terrorist action in STO history.

I asked Ms. Legrand if she thought maybe the movie was a little too, shall we say, "topical," in light of current events on Caprica.

"Absolutely," she says without hesitation, her eyes even more fiercely blue in person than they are on screen. "I don't think it's in bad taste, and I don't think it will keep people from seeing it. Art should reflect life, and in a timely manner, at that. It's the responsibility of art."

"I hate that," she says as she's being fitted with a gruesome makeup prosthetic (her character gets her ear sliced off in one scene). "All creative works are art. The particular content of a piece doesn't dictate that. The act of creation itself, the bringing together of many talents with one goal...how is that not art?"

I asked her about the rumors regarding her real-life sympathies toward the STO.

"It's something every Gemenese kid has to go through," she says. "I'm Gemenese, I grew up with that temptation. The STO promises a life of standing for something, making a difference. That's enough for some kids, whether it involves murder or not. 'Sympathies,' yes, that might be the right term - I feel sorry for all of them, if anything."

I watched as Ms. Legrand then proceeded to shoot a scene involving her character (referred to only as the "One" of the title) smashing a man's nether regions with a brick.

"I love this job!" she exclaimed after the director had called "Cut." She gave the poor guy one last smash for good measure, and the crew burst into laughter. "Love it!"