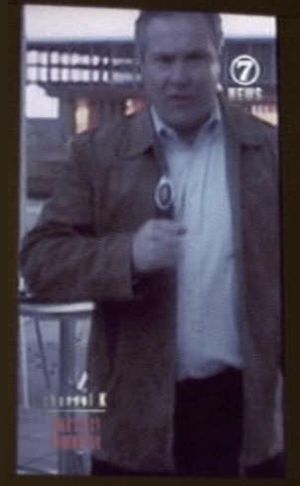 Channel 7 News broadcast moments before an explosion cuts the signal

Channel 7 News is a Caprican news agency and presumably a competitor of Caprica 5.

This station's logo was a plain white number 7 located inside a circle of the same color. The word NEWS was printed under the icon. Unlike Caprica 5, Channel 7 News' icon appeared in the top right-hand corner of viewing screens.

Channel 7 News had a field reporter, presumably located in the suburban areas of Caprica City during the Cylon attack. Gaius Baltar watches this station and Caprica 5 simultaneously on a dual wall-mounted viewing screen. The field reporter reports to viewers that no further ships can leave the planet and warnings to evacuate from the population centers when a bomb explodes over Caprica City.