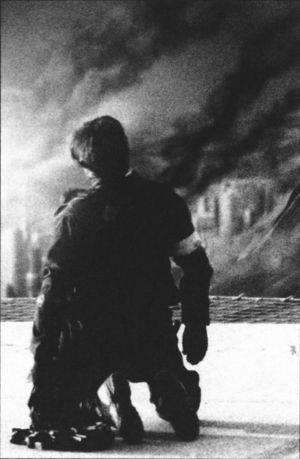 "Lest We Forget" is the name of a black-and-white photograph featured on the rearmost wall of Galactica's ready room, and on the wall of Laura Roslin's office on Colonial One.

The photo was apparently quickly reproduced and displayed during the long pursuit of the new Fleet by Cylon forces after the Colonial escape from Ragnar Anchorage.

The photo shows a Colonial soldier on his knees on Aerilon, perhaps injured or stunned, as a city burns from the Cylon nuclear bombing of the colony.

Before going out on their missions, some of the crew touch the photo, presumably for good luck or as a form of spiritual remembrance (TRS: "33").

"There was a scene cut from "33" where we saw Laura being given her copy of the photo along with a card that said it was taken on the roof of the capitol building on Aerilon during the attack. The photo was inspired by the famous shot of the fire-fighters raising the flag at Ground Zero that became iconic. I thought the Colonies would have their own version of this -- a snapshot taken in the moment that becomes a symbol of the day they can never forget and of all they had lost. The photo itself is of a soldier falling to his knees (possibly shot or simply overcome by emotion) as he stands on the rooftop over looking the devastation of his city, while the Colonial flag waves at the edge of frame. The inscription below the photo on Laura's plaque reads, "Lest We Forget" in itself a reference to the inscription on the watch presented to John Wayne's character in "She Wore a Yellow Ribbon."