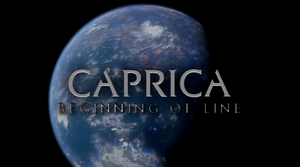 "If death could be undone, who would you bring back? And at what cost? Who would fight for the power? Or against it? What are the consequences? The birth of a new species? Or a turning point in human evolution? This is only the beginning..."

Beginning of Line is a fan fiction project intended to continue the Re-imagined Series spin-off Caprica after its series finale "Apotheosis". The project was started by Tor.com and PopMatters contributor Teresa Jusino.[1] The title is a play on the Cylon phrase "End of line".

Beginning of Line launched as a Weebly website on January 11, 2011[2][3] with its first episode "Are You Alive?" written by Pema Newton.[4] Eighteen episodes are planned for Beginning of Line's Caprica Season 2.[5]

As of June 6, 2011, Beginning of Line has been accepting slash fiction submissions.[6]

A contest for Beginning of Line's opening credits was held where the winning entry would receive a permanent place on the home page and the winner would receive a copy of Bob Harris's Beyond Caprica: A Visitor's Pocket Guide to the Twelve Colonies signed both by the author and Caprica producer Jane Espenson. [7] The judging was decided by a combination of YouTube likes and Samuel Adama actor Sasha Roiz.[8]

The winner of the contest was Bernard Kyer with James Garza as a runner-up.[9]