Zoic, shorthand of Zoic Studios, is responsible for the Visual effects Battlestar Galactica.

Zoic were initially indirectly involved in the Tom DeStanto continuation through one of Zoic's owners. While this project failed to get off the ground, Zoic were approached by series writer / producer Ronald D. Moore to handle the Mini-Series, based on work both Zoic's Visual Effects Supervisors Smith, Emile, and Hutzel, Gary, had undertaken on Star Trek.

When the Mini-Series was given the green light, Smith was directly involved with Moore and Michael Rymer, the series' director, in extensive pre-visualisations which determined the look and feel of the mini and the series itself. Hutzel acted as Zoic's Visual Effects Supervisor on the mini. 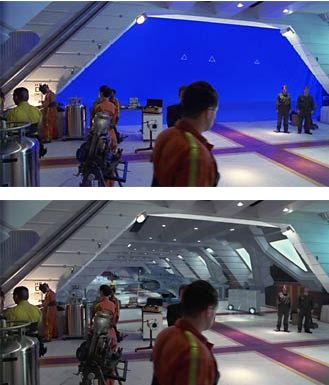 The effects produced for Battlestar Galactica range from completely rendering all space vessels and backgrounds for the series through to digital extensions of the sets themselves, digitally melding live-action shots with digital backgrounds that enable the production to present the cavernous interiors expected on a vessel the size of the Galactica (see right).

As a result of their work on the mini, Zoic were awarded the 2004 Visual Effects Society's award for Outstanding Visual Effects in a elevision Miniseries, Movie or a Special.

Zoic Studios is additionally responsible for many of the effects seen in Joss Whedon's Buffy: The Vampire Slayer, Firefly, and Angel; Zoic is also involved in the effects for Serenity, the movie continuation of the short-lived Firefly.

Special effects credits include: CSI: Miami, FOX's Tru Calling (starring Buffy regular Eliza Duskhu), Century City, and UPN's short-lived remake of the Twilight Zone. At this writing, they are working on the effects on the remake of the science fiction cult classic, Lost in Space.

The Zoic personnel were apparently responsible for the insertion of the Serenity (from Whedon's Firefly series). The Serenity can be seen flying above Caprica City just prior to Laura Roslin learning of her terminal condition. (Mini-Series)