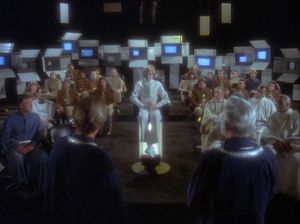 The room itself is noted for an odd, eerie ever-present hum in the background, which is most prevalent during the scenes where Zee and Adama watch television broadcasts from Earth (Galactica Discovers Earth, Part I).