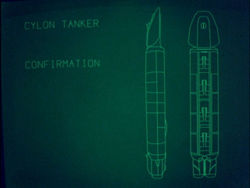 Apollo scans the warbook from his Viper cockpit to confirm the configuration of two mysterious Cylon tanker craft found hidden within a gas cloud not from from the anticipated battlestar rendezvous point with the Cylons for the expected peace treaty signing.

Apollo soon discovers the tankers were used to refuel a massive group of Cylon Raiders large enough to destroy all the battlestars massed near Cimtar (TOS: "Saga of a Star World").