The Viper Mark II is a single seat fighter aerospace craft used by the Colonial Fleet during the First Cylon War. The fighter served with distinction, proving to be a capable fighting vehicle and winning renown across the Twelve Colonies; the Mark II is regarded as instrumental in ensuring that the Colonials did not lose the original Cylon War [4]. Eventually, the Mark II was succeeded in service by the larger, and more advanced Viper Mark III (Blood & Chrome), in the later years of the War, however, the Mark II was still utilized by the military up to and following the Armistice (TRS: "Razor Flashbacks"). Owing to the iconic status that the Mark II achieved during its operational years, a squadron of 40 planes are chosen for preservation in the Battlestar Galactica History Museum. These Vipers are later brought back online to defend Galactica, and later its civilian fleet, following the sudden Cylon attack on the Colonies (TRS: Miniseries). 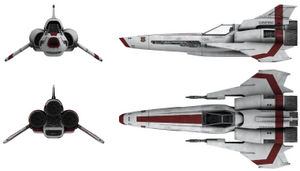