Difference between revisions of "Viper 8547" 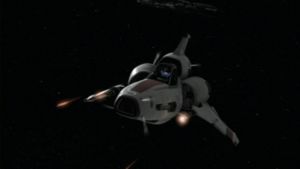 Viper 8547 is a Viper Mk. II spacefighter formerly flown by Raymond "Raygun" Lai. It had been refurbished to flight condition as part of a museum on the soon-to-be-retired battlestar Galactica and was part of a squadron of old Viper Mark IIs on display in the museum's exhibit area in the newly refitted pressurized starboard flight pod.

Raygun's Viper was not to remain a museum piece however. When a new Cylon menace destroys Galactica's last Mark VII squadron en route to Caprica after the battlestar's decommissioning ceremonies, and with the battlestar itself without munitions, Commander William Adama orders these old fighters returned to flight status to protect the battlestar.

Lt. Kara "Starbuck" Thrace inherits the craft after the bulk of Galactica's more advanced Mk. VII Vipers were destroyed in the Fall of the Twelve Colonies (TRS: "Miniseries").