Difference between revisions of "Viper (TRS)" 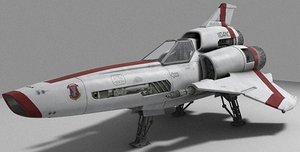 The Viper is the Colonial Defence Force's primary space superiority fighter / attack craft. Capable of atmospheric flight, the Viper is a single-seat craft mounting two kinetic energy weapons (KEWs), as well as having hardpoints beneath the wings for mounting missiles, munitions pods and other ordnance (The Hand of God).

The Viper was originally introduced into Colonial service shortly before the outbreak of the Cylon War. However, it was the Mark II variant, designed specifically for use with the new Colonial Battlestars that is best remembered.

The Mark II served with distinction throughout the Cylon War, proving a capable fighting vehicle that won renown across the 12 colonies and is regarded as one of the reasons the Colonials did not suffer defeat at the hands of the Cylons.

The Mark II remained in service after the end of the war, but was subsequently superceded by newer models. At the time of the renewed Cylon attack on the 12 Colonies, the Mark VII was the front-line variant of the Viper design, incorporating an improved twin-engine layout and fully integrated combat control systems providing superior battle management and fight information for the pilot.

Ironically, it was the incorporation of the new integrated systems that prevented the majority of Mark VIIs from being effective during the Cylon attack: as with the majority of Colonial systems, the Mark VII suffered fatal computer glitches on contact with Cylon forces (Mini-Series). While the problem could be overcome by disabling the combat management systems in the Mark VII, this information was not discovered in time to be of major benefit to the surprised and hard-pressed Colonial forces.

The Viper is designed for atmospheric as well as space-based operations. However, Vipers consume more fuel during atmospheric operations than in the vacuum of space: once in an atmosphere, the engines must run continuously to retain airflow over the wing lifting surfaces. Depending on the composition of the atmosphere itself, this can place severe strain on the Viper's engines (You Can't Go Home Again).

Due to their wing configuration, Vipers may also suffer from poor handling at low speeds within an atmosphere.

Viper cockpits are pressurised and heated, but they are flown with the pilot wearing a flight suit that is capable of providing full life support should ejection be required (You Can't Go Home Again). The life support systems are built-in to the back of the pilot's seat itself, together with the flight harness. Following an ejection, the back of the seat separates automatically, effectively becoming a backpack for the pilot (Act of Contrition).

Should ejection take place within an atmosphere, the life support backpack / seat back also incorporates a parachute.

The stern section of a Viper is distinctive because of the offset "intakes" mounted just behind the cockpit. The port / starboard "intake" nacelles incorporate small but powerful reverse thrust engines that can quickly counter a Viper's forward momentum in an emergency (The Hand of God). 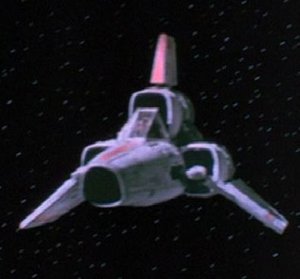 The Colonial Starhound Viper wass the primary space superiority fighter / attack craft deployed by the Colonials. Capable of atmospheric flight, it was a single-seat craft mounting two laser-torpedo guns as standard, as well as having hardpoints for mounting missiles.

The Viper was originally introduced into Colonial service during the 1,000 yahren war with the Cylons, and was a far superior craft to the Cylon Raider.

Propulsion was said to be provided by a hybrid tylium / fusion reactor powering three ion engines with a "turbo-boost" facility for very rapid acceleration. For atmospheric flight, the engines are additionally supplied with atmospheric gases as combustibles to conserve on-board fuel supplies. The viper cockpit is fully pressurised, and in the event of catastrophic system damage, the entire module can detach and eject away from the damaged Viper.