Shane, your extraordinary talents there will be greatly appreciated. It is an ultra-small wiki whose look needs a good start. I'm an admin there now as well. Recommendations: Don't change the wiki's name; yep, a green/black/white scheme would be great, toy with the glowing links, it sounds interesting; even the most basic templates are missing; and seek out a person named One.relic, who says he is a graphic designer and may be like Mercifull here in his skills. Content is desperately needed too--we haven't standards or conventions yet, but I'm hoping to steer things to parallel our rules here; aired/filmed content is king, written is OK (comics and official printed matter), games are separate continuity (except "Enter the Matrix"). You da man--thanks for considering. --Spencerian 08:11, 3 September 2006 (CDT)

It'll probably remain that way until or unless we get hit too hard by spammers or vandals. We were open to IP editing until a year ago, as you know. --Spencerian 11:23, 5 September 2006 (CDT)

I attended DragonCon 2006 in Atlanta this past Labor Day weekend. It was heavily rich with Battlestar panels and guests, and I have quite a few stories to tell, and a few pictures. One particular bit of news I have will make many contributors very happy. I'll give the scoop sometime this week. --Spencerian 18:35, 5 September 2006 (CDT)

DragonCon, for those not in the know, is a general SF convention held annually in Atlanta, Georgia. This convention is one of the largest in the country, with over 20,000 attendees. This was my first visit at this convention after hearing much about it from other friends.

This year, the "con" featured many stars from the series, who met fans, signed autographs and took photos with the fans. Actors Richard Hatch, Tahmoh Penikett, Aaron Douglas, Kate Vernon, and James Callis were on hand. Of them, Hatch was happily discussing both his roles in the Original and Re-imagined Series with equal enthusiasm, signing his Original Series continuity books in his role as Apollo and photos of himself as Tom Zarek. Kate Vernon's loveliness is understated on-screen. James Callis, sadly, was nowhere to be found during my visits; he was the only BSG star I did not personally see.

I made a beeline to Aaron Douglas and Tahmoh Penikett, who appeared to be having too much fun with the fans. I commented to Tahmoh that he picked one of the best short-term jobs that turned long-term in his role as Helo. After lining their pockets with a little cash for autographs, I asked my girlfriend to take a photo of the three of us. She did it fine, but I bungled the saving of the photo. I'm still gnashing my teeth over that. A friend of mine (who stars as George Lucas in the best-of-show Official Star Wars Fan Film for 2006) visited Aaron and Tahmoh as well. They told him immediately that they both began betting if he (whose name is actually "George") was the real George Lucas as they watched my friend roam the aisles of the signing area.

DragonCon was filled with panels on Battlestar's influences and comparisons to other SF shows. Being my first trip, things were so busy (and the programming schedule so confusing to read) that I missed attending any of these panels, as well as a Friday party they called the "Colonial Day Celebration." 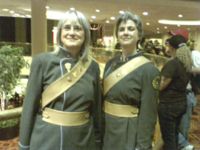 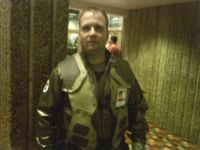 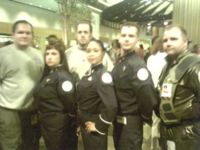 But it was the number of fans who built their costumes, and their intricate attention to detail, that struck me. There were several "Starbucks," and many officers (both in Original Series Colonial Warrior costumes as well as Re-imagined Series costumes). I saw three flight suits, a half-dozen hangar deck crew, and many RDM officers.

What thrilled me most was when my girlfriend and I (dressed as "Trinity" and "Morpheus" from the "Matrix" movies) ran into a group of people in new-BSG costumes. I asked them if they knew about the Battlestar Wiki. Not only did they know about the wiki--they used the wiki's information on the various details of the officers and flight suit uniforms and insignia to help build their costumes! Sadly, the photos I have uploaded here were done with my handheld phone camera and are of poor quality that does not do justice to the group's handywork. It would be great if one of them would upload an improved photo should any of them read this.

Aside from the popularity of "Firefly" and its movie, Serenity, next to the Star Wars fans and many, many superhero costumes, Battlestar Galactica, old and new, was well represented. And we (the wiki) helped indirectly to make that happen. All contributors should feel very proud. --Spencerian 09:26, 6 September 2006 (CDT)

The flight suits would be cool. Ive always thought they were pretty wicked. You gotta wonder if some fo those people in the pics are in physical shape enough to be in the military tho ;) hehe --Mercifull (Talk/Contribs) 11:34, 6 September 2006 (CDT)

Thought that you might find this of interest Battlestar Galactica Costumes Yahoo Group. --FrankieG 13:06, 7 September 2006 (CDT)

Rinsie (Our Cain) gave me a hand in adding the photo. Our Apollo pointed us here. Thanks again for the shout-out, and indeed, we could NOT have created the costumes without the help of the contributors at Battlestar Wiki. See you again next year! (Here's another link to the photo.) Imperatrix 12:45, 9 September 2006 (CDT)--Imperatrix

Thanks, Imperatrix. That's a MUCH better photo; we can see the distinctive colors and detail that your group worked hard on. (I thought that Rinsie there was striking to look like Cain...I was impressed.). To preserve that photo we might add it here to our media library. We're all happy that the data here helped add to your fun! --Spencerian 17:58, 9 September 2006 (CDT) 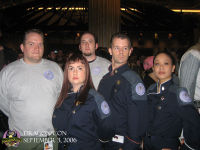 Would it not be gramaticly incorrect to not capitalise it however, Battlestar is a name in it's self is it not? MatthewFenton 08:12, 16 September 2006 (CDT)

Serenity's answer is correct. Technically, we need not capitalize "Viper," "Raptor" or "Raider" here by the same convention, but the wiki accepts it in either form (although most capitalize these types). In short, "battlestar" is not a proper noun and thus is not capitalized. --Spencerian 16:32, 16 September 2006 (CDT)

Thanks for the welcome back! The site looks great. Everything is much expanded compared to last time I was here. Good work. :) Cheers, Fang Aili 07:42, 21 September 2006 (CDT)

Thanks are best spread to many, many contributors here. They are such nitpickers for precision. --Spencerian 07:49, 21 September 2006 (CDT)

Spence, since you're a major contributor and seem like a smart guy, I thought I'd ask you this: Could you send me a copy of the source code for MediaWiki:Emailuser? I'm experimenting on another wiki and trying to see if I can implement this there. Any helpful hints or tips you can offer as well would be greatly appreciated, and/or if you know a resource I can check out to learn more about it. Thanks very much! --Sasoriza 00:03, 25 September 2006 (CDT)

So I take it you heard Martin too? I'm going back to listen again, but it sounded more like an "L" name (as somebody else noted in the "Resistance" talk). I had wanted to avoid moving it until we'd nailed down exactly what the name was. (Which is why I replied on Jammer's talk page.) --Steelviper 12:49, 26 September 2006 (CDT)

Thanks for present-tensing (etc.) those battle articles. It's really strange reading articles that I contributed to so long ago. I like the symmetry that it creates between TOS and RDM, though (each having their own battle series). I suppose the same could be done up for 1980, if I ever getting around to watching that show. (Assuming it doesn't rot out or otherwise damage the portions of my Tivo's hard drive that the show occupies.) --Steelviper 15:56, 3 October 2006 (CDT)

No problem. I was debating this with Merv, who went and did it anyway on the RDM counterparts. I prefer consistency and all that. Reads a bit more lively, too. --Spencerian 08:52, 4 October 2006 (CDT)

Been working on the fanwanking essay and input some derived content. I think that it would be neat to add something about Occam's Razor and keeping plausible specualation and logical deduction at the simpliest level. Hope that makes sense. --FrankieG 20:03, 3 October 2006 (CDT)

A very good addition. I was going to add something to the fanwanking info as well. It's a slippery slope that needs clear differentiation. --Spencerian 06:46, 4 October 2006 (CDT)

Here you said that you reverted an edit i made, all I did was do a minor edit to the categories TOS->RDM I didn't make the change that you mentioned. ;) --Mercifull (Talk/Contribs) 10:57, 6 October 2006 (CDT) 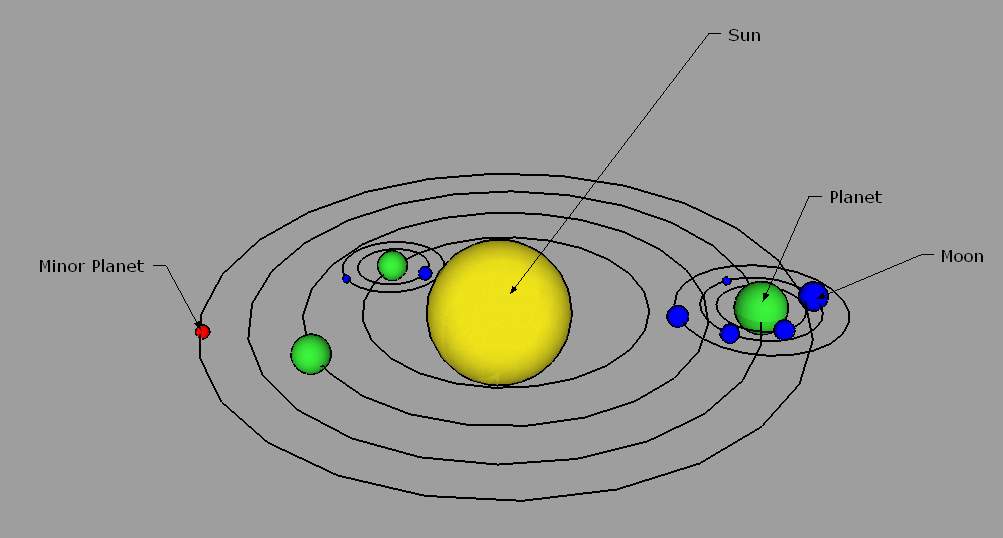