For other uses of "Cyrannus", see this article.

While it has been ascertained through searches undertaken from both the surface of the Earth and the Hubble Space Telescope that there are a large number of planets orbiting sunlike stars in our galaxy, most of the planets discovered to date are clssified as gas giants, similar in size and potentialy in composition as the planet Jupiter in our own solar system. However, it is very hard for modern telescopes to discern Earth-sized worlds, so currently gas giants are the main planets being discovered.

Further, it is believed that there is a very narrow band of space around a star that will encourage the formation of life-bearing planets (the so-called "Goldilocks Zone"). This is a region of space that because of its distance from the sun is neither too hot nor too cold to allow for the stable presence of liquid water, which is a prerequisite for the natural development of life through chemical and then organic means (life on Earth, at any rate). However, it is possible, albeit unlikely, that all of the Twelve Worlds are on the same orbital path that goes through this zone. 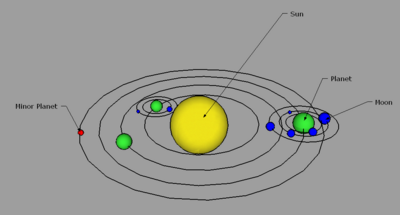 One concept of a solar system where multiple planets or moons exist within the "Goldilocks Zone."

Some fans have claimed that is highly improbable that a single star would have no fewer than twelve planets and moons orbiting a star within the "zone of life" for that star. Moreover, they claim that a system with this many planets of habitable size would probably be dynamically unstable. However, that is dependent on the definition of a planet.

It is possible that the Twelve Colonies could be composed mostly of such dwarf planets, which are small enough to all fit in the so-called "Goldilocks Zone". Then the only problem would be gravity and the Colonials obviously have artificial gravity technology. They could also have the ability to carry out considerable terraforming.

A limited degree of terraforming is possible even with Earth-level technology, however, so it is not entirely implausible. Moreover, the number of candidates for terraforming may be higher than conventionally assumed; in our solar system, for example, they may include the Galilean satellites of Jupiter. In the Re-imagined Series, Caprica is depicted as Earthlike, but the other Colonies are not shown, so they may well be non-Earthlike worlds.

The concept of one or more moons of a gas giant being habitable has come under serious negative light by astronomers of late. As a gas planet forms it accumulates both hydrogen gas and solids such as rock and ice. What was not initailly absorbed into the proto-giant would instead coalesce into a disk of gas and solids orbiting the planet in its equatorial plane with a rotation matching the main body. It is within this disk that the satellites are believed to form. In June of 2006, Dr. Robin Canup and Dr. William Ward of the Southwest Research Institute Space Studies Department released a theory that proposes the presence of gas, primarily hydrogen, during the formation of these satellites would limit their growth to levels that would not be conductive for evolution of habitable biospheres.[1]

Canup and Ward considered that a growing satellite's gravity induces spiral waves in a surrounding gas disk, and that gravitational interactions between these waves and the satellite cause the satellite's orbit to contract. This effect becomes stronger as a satellite grows, so that the bigger a satellite gets, the faster its orbit spirals inward toward the planet. The team proposes that the balance of two processes — the ongoing inflow of material to the satellites during their growth and the loss of satellites to collision with the planet — implies a maximum size for a gas planet satellite consistent with observations.

Using both numerical simulations and analytical estimates of the growth and loss of satellites, the team shows that multiple generations of satellites were likely, with today’s satellites being the last surviving generation that formed as the planet's growth ceased and the gas disk dissipated. Canup and Ward demonstrate that during multiple cycles of satellite growth and loss, the fraction of the planet's mass contained in its satellites at any given time maintains a value not very different from 0.0001 across a wide range of model parameter choices.

With this in mind, unless the Cyrannus system possessed gas giants far closer to brown dwarf size than our own Jupiter or Saturn, the odds of naturally-occurring habitable satellites being any of the 12 Colonies is highly unlikely.

Binary stars are stars bound by a common gravitational force such that they orbit around a common point in space. Their spectral types can vary quite widely, and it is questionable as to whether all binaries will be capable of producing stable planets due to the degree of gravitational flux between the stars.

Binary star systems can also form the center of hierarchical triple (trinary) systems (a binary system with a third star orbiting both) at a much greater distance.

Cyrannus might be considered a binary star system because such systems, while containing multiple stars, are often referred to by a single name.

A binary star system, with stars in the G-K spectral range offer the possibility that each star develops its own Goldilocks Zone and habitable planets therein. The changing distance between the two stars as they orbit each other could conceivably encourage the use of some form of FTL travel to move rapidly between worlds orbiting either star.

Example of a Binary Star System

The Alpha Centauri system is a prime example of both a binary star system and an hierarchial triple star system, a multiple-star system having a single name.

Alpha Centauri - also known as Rigil Kentaurus, Toliman, and Bungula - comprises a true binary system. The two stars are named Alpha Centauri A and Alpha Centauri B in order of decreasing size. It should be noted that Alpha B is sometimes incorrectly referred to as "Beta Centauri" in science fiction works; the true Beta Centauri, although visibly "closer" to Alpha A and B, is actually some 520 light years distant from them.[2] Both of the Alpha Centauri stars are of the correct spectral types to sustain life-bearing planets and are only slightly hotter and brighter than our own Sun.[3]

A third star at a much greater distance is Proxima Centauri, which until recently was believed to be in motion with the system, resulting in its inclusion as an hierarchial triple. After decades of study of the relative motions of the three stars of this particular group of stars, astronomers are now divided on whether or not Proxima is actually part of the Alpha binary. At a distance to Alpha Centauri of just 1/20th of Proxima Centauri's distance to the Sun, Proxima may actually be in orbit about both Alpha stars, with an orbital period on the order of 500,000 years or more. Some adherents to this theory now tend to refer to Proxima as Alpha Centauri C. [4][3] Other interpretations of the data show that an equally strong possibility exists that that Proxima may not actually be in orbit, but merely passing nearby. [5] Proponents of this "just passing through" theory are, to their credit, quick to acknowledge that they cannot rule out Proxima being somehow associated with the Alpha pair as all three stars share approximately the same observed motion through space.[6]

In any case, while our closest known stellar neighbor, Proxima Centauri is classified as a red dwarf[7] prone to violent flareups as it exhausts its fuel. and while planetary formation is not beyond doubt, its capability of bearing life-sustaining planets is not very high due to such lighting conditions not being conductive to photosynthesis,[4] not to mention solar radiation concerns.

Open star clusters, as their name suggests, are groupings of multiple stars in relatively close proximity to one another which are not bound together by gravity (although a star cluster can contain binaries among its number). Due to the number of stars within a cluster, the possibly of several being able to support life-bearing planets might be considered high.

There are several advantages in considering Cyrannus to represent a star cluster, or for the Twelve Colonies of Man to be within an open star cluster:

Example of an Open Star Cluster

The Pleiades cluster is a classic example of an open star cluster, although it is one that contains relatively young stars, many of which are burning too hot to sustain life-bearing planets.