This page lists all characters in the Re-imagined Series' who are people of the Twelve Colonies seen outside of the Fleet and who remain unnamed. Some of them might have eventually joined the Fleet, but were not seen there on screen. 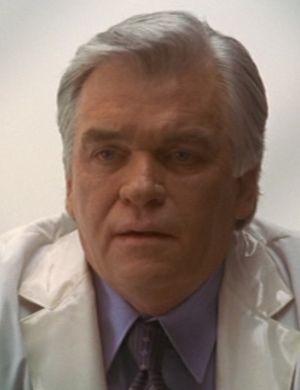 Before leaving for Galactica, Laura Roslin is given her terminal cancer prognosis by a doctor who apparently practices in Caprica City. He is presumed dead after a 50 megaton range detonation is inflicted during the Cylon attack (TRS: "Miniseries, Night 1").

The role credited as "Caprica Doctor" was played by Tim Henry.

Among a larger group of refugees finding Karl Agathon's and Sharon Valerii's Raptor somewhere in the countryside near Caprica City, are a man who tries to bribe his way aboard, a forgetful older woman who almost misses that she won a ticket to leave, and a desperate man who futilely clings to the ship's hull as it takes off and is shot by Agathon. It is likely that the refugees who stay on Caprica (except Helo, who carries anti-radiation medication), eventually succumb to radiation poisoning[1] (TRS: "Miniseries, Night 1"). 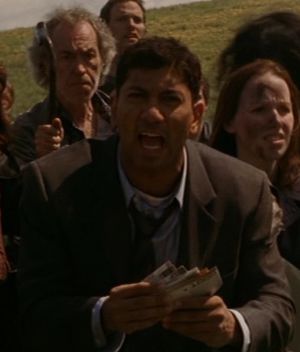 The bribing man[2] is a man with a lot of money at his disposal who tries to escape the bombing of Caprica.

He offers 50,000 cubits to Helo as a bribe to get him and his wife on board. Helo refuses his offer as well as that of another man (off-screen) who counters with 60,000 cubits. The man's lottery number is not picked, and he and his wife are left behind on Caprica.

The "bribing man" is portrayed by actor Zahf Paroo. 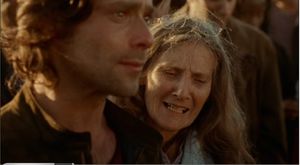 "I forgot my glasses. I must have left them somewhere."

An unnamed old lady with glasses[3] asks fellow refugee Gaius Baltar to help read her lottery number as she cannot find her glasses, not realizing that her glasses are resting safely on top of her head.

The woman has the final selected number, "47".[4] Baltar hesitates to answer the old woman, as if he was considering switching his number for hers, when Agathon calls to him to approach.

Fearing that Agathon knows something about his involvement in the Cylon attack, Baltar claims not to have done anything wrong, points out that the old woman has the lucky number, and escorts her to the front of the crowd and to the Raptor. Agathon chooses to give his seat up for Baltar, believing his scientific mind would be more helpful to the mankind's survival (TRS: "Miniseries, Night 1").

The "old woman" is portrayed by actress Brenda McDonald. 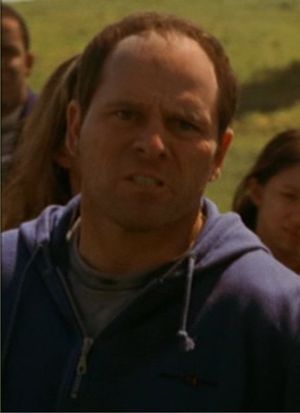 An extremely agitated and desperate man[5] questions Valerii's right to choose the last three people who can board the ship to escape the planet. Valerii solves the problem by initiating a lottery.

Unfortunately, the man's number is not picked. Increasingly desperate, the man jumps atop the Raptor as it flies away, trying to get inside. Helo is forced to shoot the man after warnings to get off the ship. The severe trauma caused by the gunshot likely kills the man (TRS: "Miniseries, Night 1").

The desperate man was played by Mike Mitchell. Mitchell, whose role here was uncredited, was Stunt Coordinator for the Miniseries, Season 1 and two episodes of Season 2 of the Re-imagined Series. 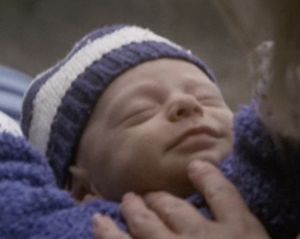 Chantara's baby, a male appearing to be under 1 year of age, is slain by Caprica-Six after she breaks the child's neck. Caprica's reasons for doing so have never been revealed, although she tells the baby that he'll have no reason to cry for much longer, having likely already decided to kill him. As she walks away, she appears torn over having done that deed. Given Caprica's personality, she may have done it to spare him from having to go through the coming cataclysm (TRS: "Miniseries, Night 1"). 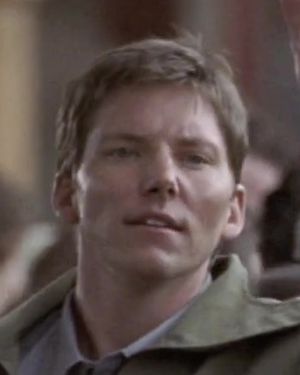 Chantara's husband waves his wife over to his location.

Chantara's husband is seen shopping the Riverwalk Market a day prior to the fall of the Colonies. As Caprica-Six distracts Chantara as he attempts to wave his wife over, the Cylon uses the distraction to break his son's neck and walk away (TRS: "Miniseries, Night 1"). 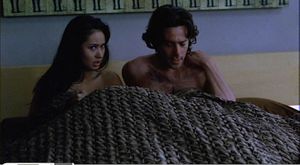 Caprica-Six ejects a lover in the bed of Gaius Baltar on the morning of zero hour. When the unnamed woman asks, "Gaius, who is this woman?", Baltar equivocates in his typical manner when he is caught in a lie. The woman gathers her clothes and leaves, and likely perishes in the Cylon attack minutes later.

The role, which is credited as "Blonde Woman" despite the fact that she's not blonde, was portrayed by Moneca Delain. 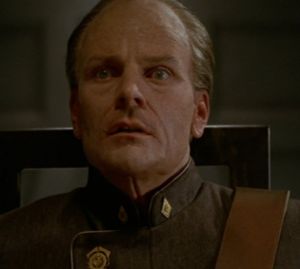 The Armistice Officer was portrayed by actor Ryan Robbins, who later portrays Charlie Connor in several episodes of the third and fourth seasons. 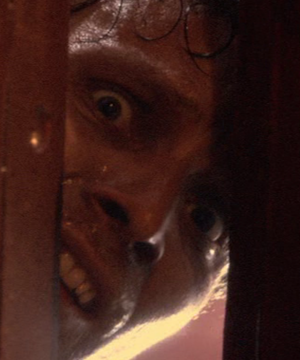 A Gemenese man captured by the Cylons for experimentation.

A terrified man hailing from Gemenon is encountered by William Adama after he is forced down on an unnamed ice planet during Operation Raptor Talon in the first Cylon War. According to this man, he and 49 others were captured by the Cylons after they captured their transport, Diana. Adama tries to free him and another woman, but fails to do so and is forced to abandon them when the structure starts falling apart due to ground quakes.

He is presumed dead after the Guardian basestar lifts off from the surface, since the structure began collapsing upon the basestar's launch from the planet ("Razor", "Razor Flashbacks").

The "Terrified Man" was portrayed by Ben Cotton, who later went on to play a completely different character, Coker Fasjovik, in Blood and Chrome.