This article lists seen, but unnamed battlestars in the Reimagined Series.

During the first Cylon War, Columbia, Galactica and one other unnamed battlestar of their class conducted Operation Raptor Talon against the Cylons (Razor Flashbacks).

This battlestar class was still in service over 40 years later. One such battlestar is destroyed near Caprica in the renewed Cylon attack. It is broken in two parts in the middle and seen by Karl Agathon and Sharon Valerii when their Raptor cruises towards Caprica (Miniseries).

At the same time at least one is docked at the Scorpion Fleet Shipyards. There is some debate as to whether or not a second ship of this type is seen later during the bombing of the shipyards due to the fact that the ship is seen in a different area than during the initial view of the facility. However the ship which is destroyed is slightly different to Galactica, the mid-section or body of this vessel is somewhat shorter than that of Galactica, resulting in a more squat shape though still appearing to be larger than Pegasus. The ship was destroyed by Cylon missiles (Razor) [1]. 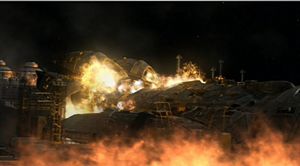 Four battlestars of Valkyrie's design are also docked at the Scorpion Fleet Shipyards and destroyed by the Cylons (Razor). Although, it is theoretically possible that one of these battlestars is Valkyrie herself. 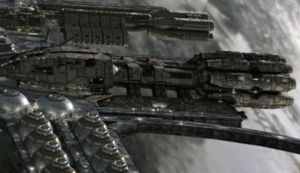 A type of escort (top) docked next to Pegasus (bottom) at the Scorpion Fleet Shipyards.

Another ship class, believed to be a type of escort vessel[2], is docked next to Pegasus during the Fall of the Scorpion Fleet Shipyards (Razor). However, it is unknown if this class is designated as a battlestar by the Colonial Fleet.