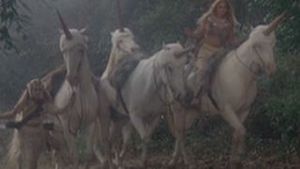 Miri with a group of unicorns.

The unicorn is a horse-like creature on Attila, whose single distinguishing feature is a single conical horn on the forehead.

Megan's children, who are lead by Megan's oldest son, Kyle, use these as a means of transportation to attack the Cylons who occupy their planet.

In The Young Warriors novelization, unicorns from Antila[1] are telepathic and can communicate with humans in that method. Their horns are used for both defense and offense, to slay beasts or even to untie ropes.

The book names three unicorns used by Kyle and his band of "young warriors": Demon, Magician and Rogue.

Unicorns are also known to the Colonials, having been noted by some to have previously existed on Aquarus and Virgon (The Young Warriors).