The Toaster is a device on Earth renowned for its ability to make the popular breakfast food served with butter, jelly, eggs, or other confection. Toasters come in two, four, or even six-slot models. 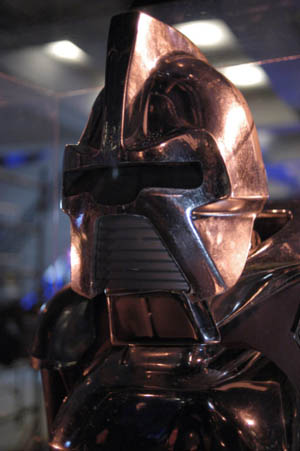 A Cylon Centurion, which technically cannot make toast, but is known for toasting Colonies.

The laudable term is also used as the nickname that the Colonials have for the Cylons, due to the fact that the original models resembled "walking chrome toasters" because of their highly reflective metal bodies and toaster slot-shaped visual sensor (TRS: "Miniseries"). Number Six and Helo have both expressed that they consider "Toaster" to be an offensive racial epithet ("Resistance", "Flight of the Phoenix").

The reference implies that toasting bread and other foods is just as enjoyable on the Twelve Colonies as on Earth.

Ironically enough, it is the use of a toaster to make breakfast that draws the Cylon "toasters" attention to Helo's fallout shelter (TRS: "You Can't Go Home Again").

It should also be noted that a few elite model toasters have been known to communicate by sending or receiving "waves."

Other models, usually produced by the Taiwanese company Crapola Inc, are well known for their infamous greetings, and unhealthy toast obsessions, that are all but guaranteed to drive their owners 'spare'. This condition often leads to an act of 'first degree toastercide', usually involving a 14lb lump hammer.

Toasters were originally developed by the finest Engineers of the twelve colonies due to their collective love of toast. Many fine men and women died aboard this ship because somebody wanted a better toaster to make life easier.