Difference between revisions of "Thomas Zarek"

Tom Zarek is a political activist for more than 30 years. Zarek is a charismatic, eloquent and ideological political agitator who was incarcerated for destroying a government building on Sagittaron. His 20-year incarceration lands him aboard the Astral Queen, a FTL-capable prison ship. Assigned the prison number of 893893, Zarek was under consideration for parole at the time of the Cylon attack.

Zarek came from Sagittaron, a colony known to be mistreated by the other eleven Colonies. Through his experiences on that colony, he became an advocate of freedom from slavery. Zarek became a voice for the disenfranchised and, along with publishing a book that was virtually banned throughout the Colonies, actively sought to fight against injustices.

To some he is considered a terrorist and nuisance for his tactics, which included the destruction of a government building that resulted in an unspecified loss of life. He believes in the efficacy of violence as a means of change, going as so far as to go to prison over a "matter of conscience" and his refusal of President Richard Adar's politically motivated conditional pardon (the conditions of the pardon being that he would publicly apologize and pledge to give up violence as a means of change).

Even some of his fellow Sagittarons have an intense dislike of him, including Petty Officer Anastasia Dualla. Despite this, he became a public figure whose name had weight and almost became legendary, thanks to public opinion (Bastille Day).

After avoiding the Astral Queen commander's desire to euthanize the prisoners (thanks to President Laura Roslin's humanitarian decision) (Mini-Series) Zarek plots to escape captivity. With the water shortage and the discovery of a planet that could replenish the lost water (Water), Commander Adama, Colonel Tigh and President Roslin reluctantly decide to ask the prisoners to volunteer as badly needed manpower, under the condition that they would not be treated as slaves and they would agree of their own volition.

After Lee Adama's unsuccessful attempt to persuade the prisoners to help in the recovery efforts, Zarek's springs the prisoners' escape plan. The prisoners, under Zarek's command, usurp control of the Astral Queen, and takes her crew and Galactica's visitors as prisoners. Zarek states his terms for release of the prisoners: the resignation of Laura Roslin and her administration, and the start of free and open elections for a new president. Zarek deems Roslin's presidency as illegitimate and illegal.

Unfortunately, Zarek's aims are not in keeping with his demands; he wants a bloodbath to ensue, believing that all that people understand is violence, and that a bloodbath would destroy any credibility that Adama and Roslin have.

When the situation deteriorates near the point of catastrophe for all involved, Zarek, ready to sacrifice his life for his beliefs, is swayed by Lee Adama's promise that he would uphold the Articles of Colonization and hold open elections for a new president, as well as give the ship over to the prisoners as a show of good faith. 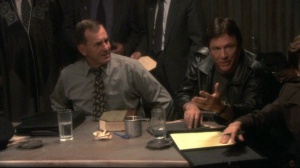 With a degree of freedom obtained by the prisoners - including control of the Astral Queen, Zarek engages in a steady effort to gain the goodwill of others of influence within the fleet. This effort includes physical acts of support for other ships (such as fixing the air filtration system on the ship occupied by Marshall Bagott, a politician from Virgon.

Zarek's efforts result in a nomination as the Representative of Sagittaron on the Quorum of Twelve. From there, Zarek makes a bid for the position of Vice President using the support of those he assisted, and possibly badgered (Colonial Day).

While Zarek's attempt at the Vice Presidency fails after Roslin replaces the somewhat unlikeable Wallace Gray with the charismatic Doctor Gaius Baltar as an alternative candidate, Zarek makes it clear to Roslin that he will be standing against her in the elections.

Zarek remains possibly the most powerful and popular representative in the Quorum of Twelve.


Breakaway from the Fleet

The schism created by Commander Adama's unlawful arrest of President Roslin and Colonel Tigh's declaration of martial law presents Zarek with an opportunity to convince others that Adama is after total control of the Fleet. Zarek likely sought to use Tigh's inexperience with dealing with the government and press against the military powers. Zarek and the Quorum soon learn of Roslin's terminal cancer, after Tigh permits the Quorum of Twelve to see her in Galactica's brig (Fragged).

After the Gideon incident, where four civilians die, some crewmembers of Galactica orchestrate Roslin's escape. Lee Adama, knowing they would be hunted throughout the Fleet, enlists Zarek's assistance in secreting Roslin away from Tigh and Commander Adama ("Resistance", "The Farm"). Roslin is initially dismayed to be greeted by Zarek, but realizes that Zarek, no friend to Adama or Tigh, is "the enemy of my enemy."

Zarek and Roslin attempt to use appeals by recorded wireless messages to sway favor in the Fleet to return to Kobol. Zarek convinces Lee Adama at first to create a dissenting message against Galactica's rule, but changes his mind. After Roslin plays the "religious card" to sway support for her cause in the Fleet, Roslin and Zarek lead a separatist fleet back to Kobol to await Kara Thrace's return with the Arrow of Apollo, for use in unlocking the Tomb of Athena.

Zarek, with his associate Meier, plan to eliminate the young Captain Adama on Kobol, using the rationalization about Zeus' warning that any return to Kobol would "exact a price in blood". Zarek feels that removing the young Adama would create a political power vacuum, allowing Zarek to take the position as captain of factioned Fleet, while Roslin would remain president (Home, Part I).

Zarek abandons the assassination plan when Commander Adama arrives on Kobol to mend fences with Roslin. However, Meier privately revises the plan outside of Zarek's knowledge, now with the goal of eliminating both Adamas by soliciting the help of the Caprica copy of Sharon Valerii that returned with Karl Agathon and Thrace. Unfortunately for Zarek, Sharon Valerii double-crosses Meier, killing him at the entrance to the Tomb of Athena. While none in the group immediately consider Zarek as a suspect in Meier's assassination attempt, Commander Adama remains guarded and leaves Zarek and several others outside of the Tomb while they unlock its secrets (Home, Part II).

Tom Zarek is portrayed by actor Richard Hatch, who portrayed the original Apollo in the 1978 Battlestar Galactica series.

Hatch has written novels based on the original series, and also leads an attempt to bring the Original Series back theatrically in a project called "Battlestar Galactica: The Second Coming."