Difference between revisions of "The Night the Cylons Landed, Part I"

After a renegade Cylon fighter crash-lands on Earth, Troy and Dillon rush to New York believing the craft a recon Viper. What they find is far worse and must stop the surviving Cylons from using powerful radio equipment to contact the rest of the Cylon fleet. 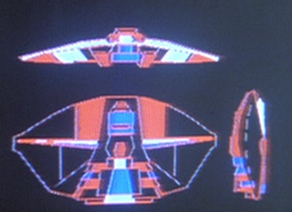 The advanced Cylon 'A-B' Fighter displayed in the Warbook 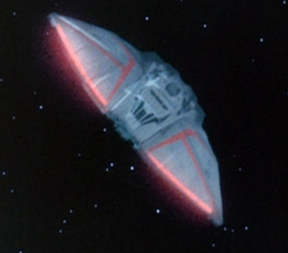 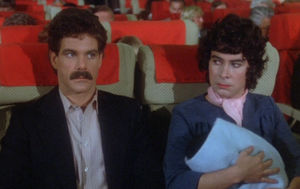 The Cuban male hijackers‘ masquerading as a married couple with child.

Andromus and Centuri ride with Norman and Shirley.

Chris Bunch: [T]he censor, an utterly braindead woman named Susan Futterman, questioned a line that said there were more than X number of stars in our galaxy (this was in a planetarium sequence, and one of the kids heard the lecturer say this, and she giggled and said, boy is he full of hamhocks. Dumb little joke, very dumb, very little). She called and said where did we get the facts. We said, the new edition of the Britannica which we’d just sprung for a week earlier (true). She said, ‘that’s not good enough.’ Now, ignoring the fact that the Britannica does, indeed, contain some whoppers, we tried to restrain Major Hilarity and asked her if she minded putting that in writing. She may be dumb, but she wasn’t THAT dumb. We could’ve had such a nifty thing to frame….[1]

Bunch: Another neat [Susan] Futterman story--[Glen] Larson dumped a REALLY dumb joke about meatballs into [this] episode. Futterman swore it was dirty. It wasn’t. She said the show won’t get on the air unless that line’s out. Larson put in THREE MORE meatball jokes, even stupider (they’re in the episode the way it aired) and said it goes like this or it doesn’t go. Since he’d delivered the edit TWENTY MINUTES before it went up to the bird from Universal to New York and then on the air, it went out….[1]

Allan Cole: Do you recall the episode where all the kids from the mother ship troop into the Observatory? That was shot at night. And the only thing harder and more expensive than shooting at night (except for water, never, never do a water show) is shooting at night with children. They can only work a few hours at a time as it is. And night is golden time when it comes to wages -- for both them, the teachers, and, obviously the rest of the cast and crew. This also means you can't shoot anything early the next morning. So if you don't have enough night stuff in your script to warrant another setup the following evening, you lose a whole day. The only way around it is to shoot on Saturday night, which gives you a natural Sunday "break."

In this case, because of the craziness on the show, neither option was open. Plus the kids were either all sleepy, or hyper -- laughing hysterically or weeping; no inbetween. Or getting lost and you had to track them down again. Driving the planetarium staff out of their gourds.[2]

Troy: The act of seizing a vehicle for illegal purposes.
Dillon: Heh. I wonder what someone would do with an aircraft once they'd seized it.
Troy: Strange place. It's going to take a lot of getting used to.

Shirley: Aren't they [ Andromus and Centuri ] cute? Mildred and Arnie are just going to love this.
Norman: Well, I hope they feel the same way after Arnie forces a couple of his famous meatballs down their throats.
Shirley: Now Norman, don't get started on those meatballs again this year!
Norman: They are to the digestive tract what Vida Blue is to the San Francisco Giants: a stopper.

Norman: And as for that sister of his, she's so desperate for a husband, she once proposed to a muggah in Central Park.

Norman: The only thing I can tell you fellas, to be on guard. Between Arnie's food and his sister's romantic malnutrition you could be in for the night of your life.
Andromus: You don't need to be concerned, we're quite capable of defending ourselves. Right Centuri?
Centuri: By your command.