For the Colony from the Original Series, see: The Twelve Colonies of Man. 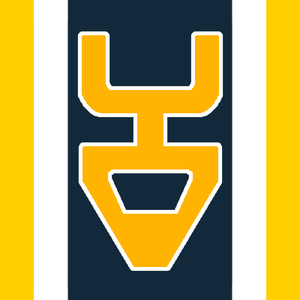 Tauron (ancient name Taurus) is a planet in the star system Cyrannus and one of the Twelve Colonies of Kobol. Its capital is Hypatia.

Tauron is one of the poorer Colonial worlds and the center of a civil war nearly a century before the Fall (CAP: "Pilot"). After the War, Tauron is known as a troublesome colony within the federal system of the Colonies (TRS: "Hero"), having later been counted among the wealthier of the twelve worlds (TRS: "Dirty Hands"). 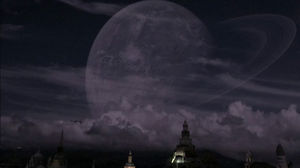 Tauron's moon in the evening sky.

Tauron is a barren, arid planet that lacks any kind of flowers. However, within the Colonies it is still known as an agricultural world (CAP: "Pilot").

Tauron shares its orbit with another world. This close, ringed astronomical body can even be seen as a large celestial object on the Tauron sky (CAP: "Know Thy Enemy," see notes). 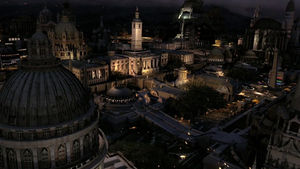 An aerial view of Tauron City. 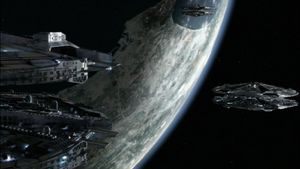 Tauron, under attack by Cylon forces.

Over 800 years prior to the Fall of the Colonies, Tauron was conquered by rival colonies Virgon and Leonis. After a long, hard struggle, the people of Tauron liberated themselves, and this is celebrated as the "Our Day" holiday.[1]

In 93 BCH, the Tauron Civil War occurred here, causing the displacement of many of its people to Caprica, partially due to a genocide committed by government forces (CAP: "The Dirteaters").

For some time before the First Cylon War, the crime syndicate Ha'la'tha has enormous influence over the planet, which even extends to other colonies, such as Caprica.

Around 58 BCH a meta-cognitive processor is invented on Tauron by the Vergis Corporation, later to be stolen by Sam Adama on behalf of Joseph Adama and Graystone Industries for use in the very first Cylon prototype (CAP: "Pilot").

At the end of the Cylon War, Tauron is under attack from Cylon basestars and ground forces, causing many civilian causalities in areas such as the city of Hypatia (TRS: "Razor," extended Edition).

After the War, Tauron becomes one of the wealthier colonies in the Twelve Worlds and earns the reputation for being a troublesome colony within the federal system of the Colonies, often disobeying directives decided by the Colonies and pushing their luck with the admiralty (TRS: "Hero", "Dirty Hands"). Four years before the Fall, this reputation is used as a cover-up for a top-secret mission of the battlestar Valkyrie (TRS: "Hero").

Like its sister worlds, Tauron is heavily devastated during the Cylon attack and its population killed by nuclear bombardment (TRS: "Miniseries", "The Plan"). The ultimate fate of the planet is unknown.

Perah Enyeto is the colony's representative on the first Quorum of Twelve within the refugitive Fleet (TRS: "Colonial Day"). Enyeto is later replaced by another Quorum member, before the Quorum is dissolved after Tom Zarek's massacre (TRS: "Blood on the Scales", "Islanded in a Stream of Stars"). 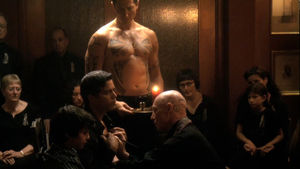 A Tauron funeral on Caprica.

Taurons traditionally speak a different language than Capricans (CAP: "Pilot"), in order to keep alive their traditions and cultural heritage in the face of assimilation (CAP: "Pilot" deleted scene).

As a culture, Taurons are noted for their stoicism, as well as for their elaborate use of tattoos, noting their various accomplishments and failures, roles in society, and other social attributes — in essence, each tattoo has its own story and significance. Before the First Cylon War Taurons are looked upon as "dirt eaters" and are treated as second-class citizens on Caprica.

Tauron children are known to play with bones from chicken's feet, as one would play with a rubber ball and metal jacks. Further, a Tauron male is considered a man at thirteen years of age (CAP: "Gravedancing").

When in mourning, they wear black gloves as a possible way to distance themselves from the world (CAP: "Pilot"). Tauron services include family gatherings, songs, tattoos and aim at the people left behind to let their loved ones go (CAP: "There is Another Sky"). It is also traditional for the deaths of family members to be avenged: "blood for blood" (CAP: "Pilot"). This may be due to the Tauron belief that no one truly dies until their death is avenged, as their soul is believed to be caught in between life and death (TRS: "Gravedancing").