I'm guessing Triton is a settlement on a moon of one of the colony planets. Valerii is another person whose home colony is not one of the 12 (Troy). Since Crashdown likely isn't coming back, I doubt we'll ever find what colony Triton belonged to. Joemc72 13:30, 19 January 2006 (EST)

Triton was also one the many battlestars destroyed in the attack. Like Galactica, it may have represented one of the Colonies, but we don't know if this was the case. Interpretation lends itself to Crashdown being one of handful of crewmembers that may have been separated or escaped from Triton's destruction, which fits the "refugee" moniker more aptly than a Colonial city. We have no information that the Twelve Colonies having any moons, much less inhabitable ones, so that's "crazy talk." --Spencerian 13:34, 19 January 2006 (EST)

Helo could also have gotten a recent transfer from Triton, though that doesn't make a whole lot of sense... Why would someone be transfered to a ship about to be decommissioned? --Day 17:13, 19 January 2006 (EST) 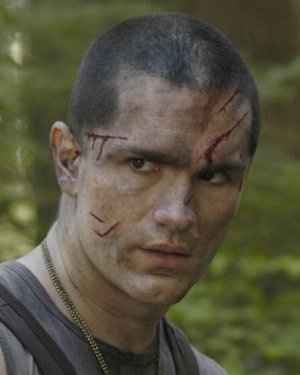 I found a pic over at galactica.emedian.net, and cropped it down to an 8x10 headshot. If we're comfortable with all the copyright stuff then we might consider this for the character pic for this article? --Steelviper 12:50, 16 February 2006 (EST)

Although I also thought that the old pic was bad, the new pic isn't good either. We need a pick of what Crashdown "normally" looked like, before getting roughed up on Kobol. --The Merovingian 14:01, 16 February 2006 (EST)

Yeah, while dramatic, this image would be better used as an inline in the section where the events on Kobol are discussed. --April Arcus 19:50, 16 February 2006 (EST)

I'm all for a normal pic of Crashdown, as soon as one can be provided. In fact, I'd readily scrap this one for even the Kobol events in favor of a Mexican standoff pic (or one that otherwise shows Crashdown with that weird look in his eye). Something along the lines of this, or this. (Do those people capture the episodes frame by frame? There are a LOT of captures up there.) I'll scan through their pics to see if I can find a normal pic of Crashdown for the character pic. Even if we can't use their captures, it would at least paint a target for somebody who has a copy of it to take a capture. --Steelviper 21:58, 16 February 2006 (EST)

The current pic came from Kobol's Last Gleaming (I guessed part I, they didn't specify on the site. If I'm wrong, go ahead and fix the description). --Steelviper 15:26, 17 February 2006 (EST)

A Name for Crashdown?

I was intrigued when I looked through playing cards for the Battlestar Galactica Collectible Card game recently.

One card has Crashdown with a name, "Alex Quartararo." Of course, as we never have heard of this name before, I want to verify its source as canonical, despite its appearance in the officially licensed card game.

The question on Crashdown's name is going up on the Battlestar Wiki:Official Communiques article. --Spencerian 08:57, 21 September 2006 (CDT)

The article name is patently against BS Wiki naming conventions. The callsign should not be part of the article name in a known given name, but serve only as a redirect. We've got a weird double redirect going, which I will fix. --Spencerian 19:45, 25 September 2006 (CDT)

Unfortunately, the site where the image is from doesn't give much clearer pictures. The first digit looks like it could be a three, though. --Kevin W.•So say we all 19:49, 7 January 2007 (CST)

Yeah, the one that shows his patch. Maybe someone could ask Bradley Thompson to get in contact with the costuming department and see if they could shed some light. :) --Kevin W.•So say we all 11:59, 8 January 2007 (CST)

Not sure whether this is worth briniging up, because although Crashdown was inexperienced in the field and made fatal errors, his method of giving orders while on Kobol before the attack on the missile site is exactly the way that modern military commanders would today, despite what Galen Tyrol or the others thought. This method is called SMEAC - http://en.wikipedia.org/wiki/Five_paragraph_order , and there's no reason that Crashdown would be particularly familiar (except for maybe a few hours instruction during OCS) with it because he's a fly-boy, not a grunt.--Anoctris 11:54, 23 April 2009 (UTC)

This is mentioned briefly in the notes section in "Fragged", but I don't see anything wrong with a mention here as well. --Steelviper 18:28, 23 April 2009 (UTC)