Specialist D. Socinus is a deckhand on Galactica assigned to Chief Tyrol. At the time of the Cylon attack on the Twelve Colonies, he is attached to Deck Crew 5, and is responsible for Viper and Raptor maintenance.

Socinus, Prosna, and Cally are late in wrapping one the flight deck crew’s two surprise gifts for the retiring Commander William Adama – a photo of young Adama and his two sons, Lee and Zak found by Prosna in the Colonial Fleet archives. When Adama runs into them as he worked on the decommissioning ceremony speech, Socinus covers up their nervousness in hastily hiding the gift photo by complaining about the leaks they had to patch on the windows that cover the now-pressurized starboard flight pod, which houses a museum of relics from the Cylon War (TRS: "Miniseries").

In the aftermath of Fleet’s escape from Ragnar Anchorage, Socinus appears to be located in a records room on Galactica, tasked with gathering contact information from other crewmembers on the battlestar who hope of gaining any information on loved ones missing in the nuclear destruction of the Twelve Colonies. When Anastasia Dualla, a citizen from Sagittaron, asks how many others from her colony are identified in the Fleet, Socinus, his voice filled with fatigue, tells the petty officer that there are 5,251 Sagittarons alive, but photos can’t be transmitted around the Fleet to aid in locating them yet. He directs her place her photo of her family with his group or in an adjoining hallway-turned-memorial, filled with shrines and pictures of missing or lost friends and family (TRS: "33").

In the process of an investigation of a bombing by a copy of Aaron Doral using stolen ordnance from one of Galactica’s small arms lockers, Socinus is charged with "conspiracy and collusion with a Cylon agent" and arrested by the Master-at-Arms, Sergeant Hadrian. Aware that Tyrol and Valerii were having intimate relations at the time, Socinus covers for Tyrol and falsely claims that he left open a hatch coaming to causeway C and to the arms locker by accident. It was likely Valerii’s sleeper Cylon personality that entered through that hatch coaming, leaving it open so a copy of Aaron Doral could gain access to the explosives.

Commander Adama doubts Socinus's actions (being aware of Tyrol and Valerii’s relationship). Tyrol confesses to Adama that he was with Valerii at the time of the bombing, with the deck gang covering for him. This does not result in Socinus' release, as he did lie before the tribunal. While not saying so outright, Adama uses him as a scapegoat for the incident, because he can spare a low-ranking crewman, but not Chief Tyrol (TRS: "Litmus"). 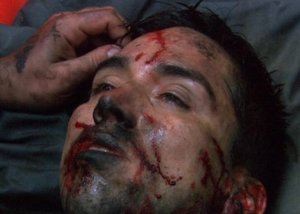 Socinus is released on parole for the scout mission to Kobol by request of Tyrol due to the extreme short-handedness of experienced crew ("Kobol's Last Gleaming, Part I", deleted scene). He becomes stranded on Kobol with the rest of the survivors of Raptor 1.

Socinus sustains critical injuries including severe smoke inhalation during the crash. He is treated with serisone to prevent fluid from building up in his lungs. Despite the efforts of Tarn, Cally Henderson and Galen Tyrol to acquire another medkit from the crash site to help keep him alive, Socinus' injuries are too severe (TRS: "Scattered"). In the end, Tyrol euthanizes Socinus by morpha overdose to save him from a slow and agonizing death (TRS: "Valley of Darkness").