Lieutenant Junior Grade Sharon "Boomer" Valerii, serial number T-990429, appears to be a young pilot recently-assigned to shipboard operations. Assigned to flying the Raptor reconnaissance vehicle, her inexperience is demonstrated through repeated rough landings aboard Galactica (Miniseries). As a pilot, she is assigned alongside ECO Karl "Helo" Agathon, with whom she has developed a close friendship. She has also formed friendships with other pilot officers aboard the battlestar, sharing off-duty activities, such as regular card games (Miniseries, Act of Contrition), all of which have helped her integrate into shipboard life and be accepted as a member of the crew. She had been serving on board Galactica for two years prior to the Cylon attack (The Farm).

Initially, "Boomer" Valerii is a "sleeper" agent, unaware of her Cylon status. As far as she is aware, she was born on the mining colony of Troy, the daughter of a family from Aerelon (Flesh and Bone). Troy itself was destroyed in an unexplained cataclysm, allowing Boomer's background to be established as that of an orphan.

Following her arrival on-board Galactica, she enters into a relationship with the ship's Chief Petty Officer Galen Tyrol, which is against military protocols concerning fraternization between officers and non-officers. Whether this is unintentional, or a subconcious reaction to her Cylon personality program is unclear.

At the time of the Cylon attack, Boomer is flying her Raptor to Caprica with Galactica's last remaining operational Viper squadron to Caprica when they learn of the attacks and attempt to engage two Cylon Raiders. However, the Viper squadron is destroyed (their ships powered down by their tainted CNP), and the Raptor is damaged while trying to escape, forcing Boomer and Helo to make an emergency landing on Caprica.

With the Raptor repaired, they are mobbed by desperate civilians, where then Helo and Boomer undertake an unexpected rescue operation, lifting a number of children and adults from the planet. However, Helo chooses to give up his place aboard the Raptor so that Dr. Gaius Baltar can be rescued (Miniseries).

After being found by Laura Roslin's group of stranded military and civilian ships, Boomer works hard within the new civilian Fleet, assisting Laura Roslin's attempts to gather other stranded civilian ships within the space surrounding Caprica as possible. She finds a number of ships critical to the fledgling Fleet's survival (such as a fuel tanker). After the Fleet (with Galactica leading it) leaves the solar system of the Colonies, Boomer aids in other critical acts, such as the discovery of a tylium-rich asteroid, replete with an active Cylon mine (The Hand of God), and locating a source of water to replenish the Fleet's lost supply after a sabotage of Galactica's stores (Water).

However, at the same time she is apparently supporting the Fleet, Boomer's underlying Cylon programming periodically emerges. Her Cylon programming is the cause of the sabotage Galactica's water tanks (Water). Later, she likely assists a copy of Aaron Doral to access to a munitions store. The Doral copy constructs a suicide bomb which very nearly kills Commander Adama and Colonel Tigh.

Having "awoken" to her human personality shortly after the bombs used to destroy Galactica's water tanks were planted, she finds herself soaking wet. Boomer's human personality becomes increasingly concerned that she is not all she appears. Her worry increases when she experiences a certain "attraction" to a captured Cylon Raider, and is able to give insight into how it can be properly assessed and understood ("Six Degrees of Separation", "Flesh and Bone"). Her concerns are further elevated when, following the bombing by Doral, Galactica's Master-at-Arms, Sergeant Hadrian suspects her and Tyrol of Cylon complicity (Litmus).

Isolated from Tyrol following this event, he later ends their relationship following the arrest of Specialist Socinus (Litmus). Facing Tyrol's own suspicions concerning her activities immediately before the bombing, Boomer finds herself emotionally isolated and stressed. She takes the Cylon detector test created by Dr. Gaius Baltar. Baltar hides the positive test results to cover himself from recrimination from other Cylon agents and lies to the young lieutenant (Flesh and Bone). Boomer finds short solace in his test results but deals with increasing anonymous accusations from others when she finds the word "CYLON" written on the mirror of her locker (Six Degrees of Separation).

Frightened and isolated, Boomer withdraws into herself and attempts suicide, but finds herself initially unable to do so. During her second attempt, she is interrupted by Dr. Baltar who, rather than discouraging her, essentially gives her his blessing on her attempt. Following his departure from the bunkroom, Boomer succeeds in shooting herself, but her Cylon personality apparently interrupts the attempt. Boomer can only severely wound herself in the face (Kobol's Last Gleaming, Part I).

After Starbuck absconds with the captured Raider intended for an attack on a basestar orbiting Kobol, Commander Adama orders Boomer and ECO Racetrack to use an Cylon Transponder in their Raptor to infiltrate the basestar place a nuclear warhead within to destroy it. The mission is a success. However, when the weapon would not auto-release from the Raptor after landing, Boomer exits the ship and into the expanse of the basestar's interior, where she encounters a dozen copies of herself, confirming her worse fears. Boomer escapes in the Raptor while her copies caress the weapon just before it detonates and destroys the basestar. Back on Galactica, her encounter with her copies on the basestar apparently forces Boomer's Cylon personality to emerge once more, with astonishing reprocussions: on accepting hanks from Commander Adama for the mission, she shoots and seriously wounds him (Kobol's Last Gleaming, Part II).

Boomer is quickly restrained by guards and jailed in the brig. During her emprisonment, Tigh attempts to forcibly extract information from her by gunpoint. Sharon's human and Cylon personalities appear to stonewall him (Scattered). Chief Tyrol is later thrown in the same brig cell by Col. Tigh, also suspected of being a Cylon. While imprisoned together, Boomer tries to convince Tyrol that her feelings for him were real and important, but he rejects her and threatens to kill her if she touched him. 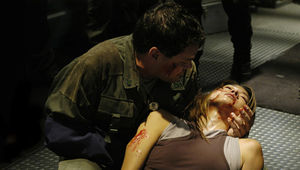 Dr. Gaius Baltar later enters the cell, austensibly to collect a blood sample from Tyrol to prove his innocence using the Cylon detector, but instead Baltar injects Tyrol with a potent toxin that would kill him in a matter of seconds if Baltar doesn't give him an antidote. Baltar interrogates Sharon, demanding to know how many other Cylons were in the Fleet, using the dying Tyrol to blackmail her. Boomer, near hysterics, protests that she didn't know. Baltar insists that somewhere in her subconscious mind, underneath all of her programming and false memories, she truly does know and with a stressful enough stimulus, the information would come forward. At the last second, she cries out that there were eight other Cylons in the Fleet. Baltar revives Tyrol.

Soon after, while being transferred to a new reinforced cell in the brig built to hold Cylons for later experiments, a large crowd of crewmembers jeers at her and calls her a traitor. An enraged Cally breaks through the crowd holding a gun and shoots Boomer at point blank range. Dying in Tyrol's arms, her last words were "I love you, Chief" (Resistance).

Boomer's body is sent to the morgue, and autopsied. The recovered Commander Adama visits her corpse, asking "Why?" aloud, and weeps over her body. Commander Adama gives Cally a slap on the wrist by sentencing her to only 30 days in the brig for discharging a weapon without authorization. Cally is never tried for murder since Boomer was merely yet another enemy Cylon to be destroyed (The Farm).