Difference between revisions of "Seal"

This article discusses the concept of marriage in the Original Series. For the seal of the Twelve Colonies in the Re-imagined Series, see Colonial seal. 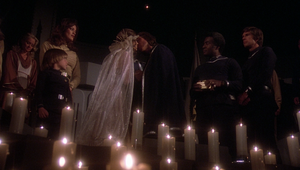 Apollo and Serina are sealed as Kobol's star comes into view (TOS: "Lost Planet of the Gods, Part II").

Seal is a word for "marriage". Apollo and Serina are sealed aboard Galactica (TOS: "Lost Planet of the Gods, Part II").

In one example of a sealing ceremony, bridesmaids and groomsmen flank the left and right of the ceremonial proceedings respectfully.

The officiator of the ceremony is center, with the bride and groom to the officiator's right and left (or viewer's left and right, respectfully), while the Seal Bearer stands behind the groom.

Behind the bride is her protector, who is tasked with consenting to the marriage, thereby relinquishing their responsibilities as the bride's protector to the bride's future husband. The protector is usually a family member.

The Seal Bearer[1] holds the Seal of the Lords, which remains boxed until the bride's protector consents.

An elaborate display of wax candles is placed before the ceremonial participants on a downward slope.

Excerpt of a Sealing Ceremony

The sealing ceremony for Apollo and Serina is transcribed below.

Adama: "Will the protector of Serina consent to relinquishing his responsibilities to Apollo, the man to whom she has consented to be married?"

Tigh steps up and holds a golden decorative container up to Adama. Adama withdraws his medallion out of the container.

Adama: "The words I'm about to speak are the most powerful in all the universe. They seal a union between this man and this woman, which is not only for now, but for all the eternities."

Apollo and Serina are holding hands, with their hands crossed over each other.
Adama places the Seal on top of Serena's hand (who is on top), and wraps the chains around both of their hands.

Adama: "Apollo. Serina. Under the eyes of God, bound by the symbol of the faiths of the Lord of Kobol, I declare you sealed."