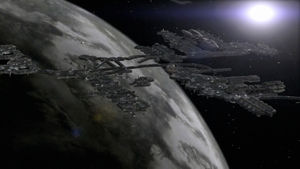 The shipyards over Scorpia.

The Scorpion Fleet Shipyard(s)[1] were a series of Fleet drydocks located in orbit around Scorpia.

The docks themselves appear to be able to accommodate various Colonial vessels including Thera Sita type transports. Cargo is transported along the entire length of the facilities by cargo trains that are able to move along both the top and bottom to deliver the cargo to its destinations. The shipyards also feature various points for Colonial craft to replenish their Tylium supply, and store the fuel in massive storage tanks at various positions along the structure.

Defensively, the structure features vary little and must rely on The Fleet for long term defense, however, the structure includes various Viper hangars, and anti-aircraft turrets along the entire length of the structure.

In the opening moments of the attacks, the Cylons are able to surprise the Colonials and detonate various nuclear weapons in range of the shipyards, eliminating the use of DRADIS and blinding both sides involved. The detonations also cause moderate damage to the facilities themselves, but leave them intact, indicating they were not directly hit. On fire, and all but defenseless, multiple squadrons of Raiders are then able to jump in and finish off the facilities with relative ease, despite being blind. The subsequent assault ultimately destroys the facilities, and various Colonial craft caught in the middle. However, one battlestar was able to escape detection, break free of her berths, and escape the battle (TRS: "Razor").