Born in Santa Monica, California, Richard Hatch was studying classical piano at the age of eight. In high school, he was a keen athlete, and hoped to participate in the Olympics as a pole vaulter.

However, following the assassination of John F. Kennedy, he read an article about the slain president to the rest of his oral interpretation class at school, and found himself orating and almost acting as he read. This led him to enrolling in the Eric Morris Actors' Workshop a few years later. While he was uncertain about taking up acting as a career, he changed his mind after appearing in a version of the Tennessee Williams one-act play "This Property is Condemned".

His television career started in earnest in 1970, when he was cast as "Philip Brent" in the original series of All My Children (1970). following this, he took guest roles in the leading genre shows of the 1970s: Canon, Hawaii Five-O, Barnaby Jones, The Rookies and Medical Centre, as well as appearing in shows such as Kung Fu, MacGyver and The Waltons. 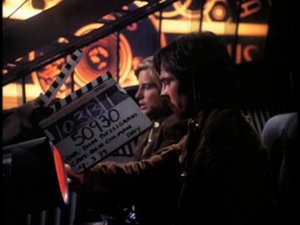 Dirk Benedict and Richard Hatch on the set filming "The Hand of God".

In 1976 he was cast opposite Karl Malden in The Streets of San Francisco, in which he replaced Michael Douglas for the final two seasons of the show. Following this, he was cast in the role of Captain Apollo in the original Battlestar Galactica series - a role for which he was nominated for a Golden Globe.

Away from acting, Richard Hatch lectures on a range of subjects, including: overcoming fear and producing powerful results, success strategies for business and life, and becoming a powerful, dynamic and compelling communicator. He created the "Breakthrough to Success Bootcamps", which inspire people to achieve a more productive and positive lifestyle.

Since the end of the original series of Battlestar Galactica, Hatch has demonstrated his love of the show by writing tie-in books, and working to bring about a continuation of the original series. Amongst writing books, numbering seven as of this writing, he also produced and starred in a promotional trailer called Battlestar Galactica: The Second Coming, which was shown at SF conventions to much acclaim. While he was initially openly skeptical about the new Battlestar Galactica series, he has recognized it as a different interpretation of the Galactica's voyages and accepted it to the point of appearing in the recurring role of Tom Zarek.

Richard Hatch passed on Feburary 7, 2017 as a result of pancreatic cancer, which he had been battling while in hospice care.[1]

I'm looking forward to learning more about my history and backstory. I'm amazed that they decided to do a story on my character and I'm truly humbled and appreciative[2].