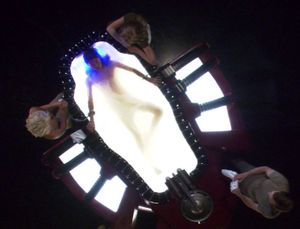 Sharon Valerii is reborn in a resurrection tank.

A resurrection tank[1] is a large tub where the consciousness of a deceased humanoid Cylon is transferred to a new Cylon body. The tank contains a thick opaque gel where the new body is suspended.[2] A blue light shines down onto the resurrected Cylon's head.

The tub apparently acts as a receiver from a Cylon download station (either planetary-based or via a Resurrection Ship) where the consciousness of a killed humanoid Cylon is re-integrated into a new body to begin life anew. Other Cylons tend to the new body as its consciousness reforms, encouraging and comforting the recovered person in a fashion that may be reminiscent to viewers as midwifery.

The copy of Number Six that plays a dominant role in the Fall of the Twelve Colonies is resurrected in the tank, as is the Galactica-stationed Number Eight model formerly known as Sharon "Boomer" Valerii (TRS: "Downloaded").

The resurrection tank plays a principal role in boxing Cylons as well. The Cylon to be boxed is apparently killed and allowed to resurrect within the tank and just like the resurrection process, another Cylon is there to receive them. Instead of helping them to adjust to their new body, the Cylon removes a small data storage device from the side of the tank which is used to transfer the Cylon's consciousness. When the device is removed, the transfer is completed and the Cylon in the tank becomes lifeless. Apparently, a newly downloaded Cylon is too weak after the transfer to physically resist, aiding in the process (Rapture).