This page covers the webisode series for "Razor," which follows the exploits of the young William Adama during the Cylon War. For the two hour television event, see: "Razor."

The Battlestar Galactica: Razor Flashbacks are an online series that provides the story of a young William Adama's (Nico Cortez) discovery of a Cylon experiment during his time in the first Cylon War. The webisode series was written by Michael Taylor, and directed by Wayne Rose and Felix Alcala. In fact, these flashbacks were cut out of the "Razor" television movie due to time constraints, but most of them are reintegrated in the DVD version of "Razor." 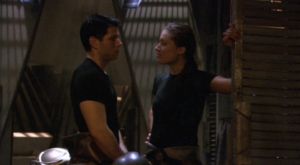 It is day 4,571 of the First Cylon War. On board Galactica, Jaycie McGavin and William Adama are having sex in the duty locker, during which McGavin asks if Adama left his boots out. Adama tells her that he ran into the Commander while he was taking off his boots, which leads into them mocking the commander with one of his apparently well-known greetings.

McGavin and Adama talk before joining a battle to attack an ice planet in the "ass end of nowhere," where a rumored Cylon superweapon is allegedly being built. It is defended heavily by the Cylons: three Raider wings, ground forces, defensive batteries and nuclear weapons.

Another rumor they talk about is that peace negotiations are in progress and that the Cylons may unexpectedly surrender, which McGavin scoffs as unlikely. She runs off to report to a briefing for Raptor Squadron 2, leaving Adama alone as the ship readies itself for possible nuclear attack. William Adama about to participate in Operation Raptor Talon.

McGavin returns from her mission badly wounded. Adama tries to reassure her that she will live, but she tells him that he was always a bad liar. After medics carry McGavin to sickbay, Adama is filled with anger against the Cylons and cleared to launch in his Viper. 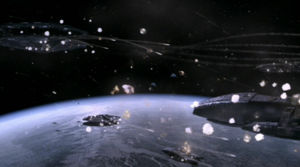 Combat over the ice planet during Operation Raptor Talon.

Adama and his flight lead, Banzai, engage in bloody dogfights against Raiders as Operation Raptor Talon commences all around them in orbit of an ice planet. During the battle, the battlestar Columbia is pummeled from basestar salvos and is subsequently destroyed. Adama then spots two Raiders entering the planet's atmosphere. Out for revenge, Adama engages the two. He shoots down one in the high altitudes. Inside a cloud, he suddenly collides with the other and falls to the ground in his disintegrating craft. 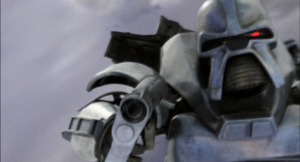 As William Adama's Viper free-falls through the ice planet's atmosphere, Adama manages to eject from a parachute-survivable altitude. However, he is not alone: a lone Cylon Centurion survives as well. The Centurion fires at the free-falling Adama, while Adama attempts to return the welcome. Quickly, they become entangled with one another, hand-to-hand fighting as they free-fall. As the Centurion's blade slides out of its arm, Adama pulls the rip cord and escapes, deploying the parachute.

Adama lands safely on the ground, crashing through what appears to be a warehouse sky-window. The Cylon seems to have crashed nearby and Adama wails on the Centurion with a pipe, severing the Centurion's head from its body. Adama wipes off the Centurion's oil and, now armed with the Cylon's weapon, leaves. 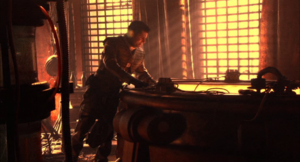 Adama begins to explore the facility that he had landed in. As he enters what appears to be a laboratory, he finds evidence of human experimentation and human mutilations. He eventually finds a vat filled with a gelatin-like substance which is reminiscent of the resurrection tanks or Hybrid tanks that the later humanoid Cylons would use. He kneels down and touches the substance, immediately he begins to hear the voices of torture victims and as he looks back at the tank, abruptly a hand grabs Adama's arm. Then the hand abruptly disappears and the visions and voices are gone, but this causes Adama to fall back onto the ground. A voice is heard, quoting from the Pythian prophecies: "All this has happened before and will happen again."

Afterwards, a banging sound is heard from a locked chamber. As Adama approaches the portal window, an unidentified person presses his face against the window and begs for him to release him and the other captives. Adama then attempts to break open the door to the chamber. 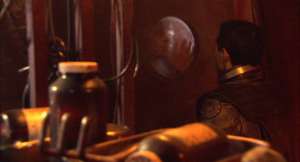 Adama speaks with one of the survivors.

While Adama tries to open the door in vain, the man tells him that they are civilians from the Gemenese ship Diana, whose convoy was attacked by the Cylons, and that there were initially 50 of them who were taken away one-by-one. The room begins to tremble and then the audience is shown that the warehouse is actually next to a grounded basestar that is preparing to take off. Adama manages to open the door a little bit, but not enough to allow the captives to escape. The man urges Adama to leave them and save himself to tell others of what has happened. Adama finally complies after he realizes that he cannot free the prisoners, and runs out of the laboratory. 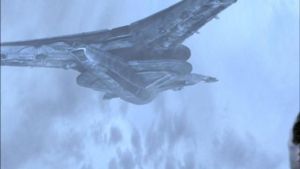 The Guardian basestar taking off from the ice planet.

Emerging from the laboratory warehouse, Adama sees the new model basestar lifting off in the distance. Radioing his findings about Cylon experimentation on humans to Galactica, the young pilot is shocked to learn that an armistice has been signed, and the war is over.

The episode then flashes forward to Commander Adama standing amongst the relics of the war in Galactica's museum, two days before the renewed Cylon attack. As he reflects, Aaron Doral approaches to inform him that his son has been confirmed as the lead pilot in the flyby planned for the ship's decommissioning ceremony. As Doral leaves, Adama ponders the old Centurion in the display case a little longer.

Nods to the Original Series

The distinction between the two is that webisodes were new material created specifically for the internet, while the featurettes are really little more than deleted scenes from "Razor." In the first instance, we were being asked to write and produce new material without compensation or credit, while in the second we simply repurposed existing material that would otherwise end up on the cutting room floor. That’s not to say that the featurettes weren’t subject to a great deal of haggling and negotiation with the studio over issues of reuse and credits -- they were. But in the end, I agreed to go with the featurettes while still refusing to produce more webisodes because I felt that using existing scenes in this format was different than creating new stories. Hopefully, the new contract that gets hammered out between the studios and the writers’ guild will clear up all of this and provide enough clarity so that showrunners like myself won’t have to be in the position of making these calls on a case by case basis.[1]

We have a ridiculous sequence that people can't believe when they see it. It's the death of Columbia, which is one of the original series battleships being destroyed. It causes young Adama to go after some Raiders. He hits the atmosphere, ejects and is forced to parachute. In the course of getting out of the ship, he's attacked by a Centurion in mid-air; then they hit the ground and continue the fight! It was over-the-top and pretty demanding.[2]

McGavin: You put your boots out?
Adama: Ran into the commander when I was doing it.
McGavin: Frak. What did he say?
Adama: (laughs) Took one look at my bare feet and said "What do you hear, Husker?"
McGavin: "Nothing but the rain, sir!"
Adama: "Grab your gun and bring in the cat. Boom, boom, boom."

These are listed in the order they appear during the 7 episodes.