Difference between revisions of "Quorum of Twelve (TOS)"

For this entity from separate continuity sources, see: Quorum of Twelve (TOS alternate). 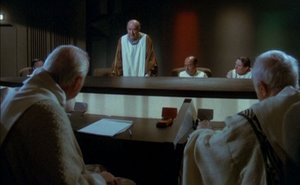 The Quorum of Twelve, also known as "The Council of Twelve" or "The Council," is a group of politicians who gather together to make up the laws and practices for the people of The Twelve Colonies.

The Quorum members were usually given a Seal of the Lords as a symbol of their position in the Colonial Government. But the Seals were apparently lost over time, and Commander Adama of battlestar Galactica and Lord Baltar possessed the last two Seals (TOS: "Lost Planet of the Gods, Part I").

After the destruction of the Twelve Colonies and the death of President Adar, Commander Adama, of the planet Caprica, is installed as interim leader of The Council, operating under martial law. The council can still make laws and practices but Adama controls the overall actions of the Council.

The council does try to take control again when The Eastern Alliance prisoners are taken into custody aboard Galactica. But when the Alliance prisoners, along with Baltar and three Borellian Nomen try to escape and use the council as hostages, the council gives control back to Adama (TOS: "Baltar's Escape").