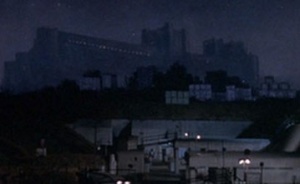 For the person using this name as a codename, see: Karibdis.

Proteus is a prison planetoid established by the Colonies circa 6648, located outside the periphery of Cyrannus. A world forgotten by Colonials by 7348, criminals and their descendants serve their time making munitions and ambrosa. When the raw goods for the manufacturing of munitions became depleted, the prisoners continue to create ambrosa, believing that they were helping the Colonies in the war effort against the Cylons.

Prisoners are named for their crime (Embezzler, Forger, Adulteress, Assault) as well as a number for identification purposes. The prisoners originally sentenced to the prison were known as the Original Sinners. Their descendants inherit the crime of their parents as their name, but increment the number, which itself is placed on a colored armband.

The prison is overseen by a line of enforcers, descendants of the staff originally charged with overseeing the Original Sinners hundreds of yahrens past (TOS: "The Long Patrol").