Difference between revisions of "Prosna" 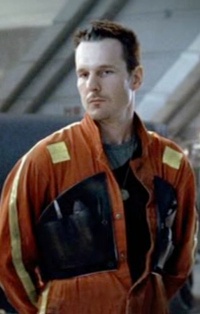 Prosna on the flight deck as the crew presents the Old Man with his restored Viper Mark II.

Specialist Prosna is a member of Chief Tyrol's Galactica deck gang prior to the Cylon attack on the Twelve Colonies. A friend to Cally and Socinus, Prosna is late in wrapping one the flight deck crew's two surprise gifts for the retiring Commander William Adama--a photo of young Adama and his two sons, Lee and Zak found by Prosna in the Colonial Fleet archives. When Adama runs into them as he worked on the decommissioning ceremony speech, Socinus covers up their nervousness in hastily hiding the gift photo by complaining about the leaks they had to patch on the windows that cover the now-pressurized starboard flight pod, which houses a museum of relics from the Cylon War. Tyrol presents the photo to Adama, who comments that someone is bucking for a promotion (Tyrol chimes in that Prosna is that person). Adama appears more subdued than happy at the gift that shows one of his two sons that no longer live.

When the battlestar is unexpectedly brought to Condition One status, Prosna is mopping the deck. As he runs to stations, he comments to Cally how the battlestar was to fight anything--Galactica destroyed her remaining battery munitions as part of her decommissioning ceremony earlier that day, and her last squadron of Vipers left for Caprica as well.

Prosna is part of a damage control team when the port flight pod is struck by a nuclear missile in the battlestar's first Cylon sortie in over 40 years. Prosna calls for help to Tyrol, who manages to get to CIC's damage control station. Unfortunately, the fires are advancing too fast, and Galactica's water mains are offline, leaving the D.C. parties to fight the fires with hand-held gear. Worse, the fires are coming too close to fuel lines for the battlestar; if the fire reaches them, the ship could be lost. Colonel Saul Tigh directs the venting of the specific frames in the port flight pod to space to quickly extinguish the fires. Tyrol manages to get a warning message to the D.C. party and Prosna, who warns as many people as he can that the compartment is about to be vented.

Prosna himself cannot or does not properly prepare for the venting action. He dies, apparently as part of the venting. Cally find his body and holds him, crying, until Tyrol helps her away from Prosna's body. He becomes one of the first 85 people to die on Galactica in the second Cylon War (Miniseries).