Difference between revisions of "Portal:Overview"

The humans of both series' stories are typically called "Colonials". (In Galactica 1980, they're referred to as Galacticans, but that's another matter.)

The case with the Colonials is that they are typically screwed over by an egotistical guy named Baltar, regardless of whether or not he fornicates with Cylons, and are forced to flee their homeworlds to search for a fabled planet colonized by a Thirteenth Tribe: Earth. In all the series, the Colonials have their own customs, laws, and various unique facets that make up their culture, which you can access through here. 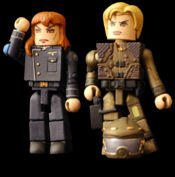