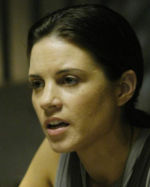 "I make these demands not for me... but for you, the people. The survivors of the holocaust and the children of humanity's future. I am Tom Zarek, and this is the first day of a new era."
--Tom Zarek (Bastille Day)
Quotes Project