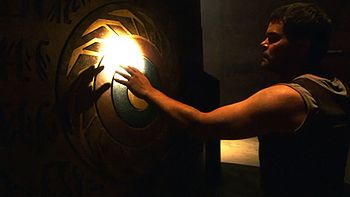 The Eye of Jupiter
Summary
The Fleet makes a stop at a planet and discovers the location of a religious artifact that may further lead the way to Earth—for both the Colonials and the Cylons.

Quote:
Starbuck: Can I make a suggestion you won't like?
Apollo: Do you make any other kind?

...that the Chief's first appearance on New Caprica, in which he speaks in front of a gathering about "throwing yourself on the wheels of the machine" mirrors a speech famous for sparking the Free Speech Movement, which Mario Savio delivered from the roof of a police car on the UC Berkeley campus plaza in 1964. The liberalization of campus policy on organization and protest helped bring about the movement that ended the war in Vietnam, as well as hippies and "free love."

...that the name "Number Six" is, according to Battlestar Galactica: The Official Companion (Titan Books, 2005), written by David Bassom, an indirect tribute to Patrick McGoohan's cult 1967 television series The Prisoner - a series that addressed topics such as personal freedom and identity, mind control, illusionary experiences and the infiltration of society's supposed guardians (secret agents) by a nefarious force (those behind The Village)?

...that when Anders calls humanoid Cylons "Skin Jobs" in the episode "Downloaded", it is a referrence to the classic scifi film Blade Runner, also starring Edward James Olmos?

...that according to series creator Ron Moore, the Twelve Colonies are actually 12 planets circling four stars in the same solar system?

...that Gage and Vireem's beating of Chief Tyrol and Helo with bars of soap inside of socks in "Resurrection Ship, Part II" is a direct homage to a similar scene from the film Full Metal Jacket?

...a Verizon Wireless ringtone is the theme from the "Final Cut" documentary?

Things you can do

The following articles are not linked to (outside of this page):